Commenting on the report, Pawan Goyal, Chief Business Officer, Naukri.com. said, “Due to the festive period in November'18, there is an 8% cumulative year on year growth in October’19 & November'19 versus last year same time. BPO and IT-Software industries are fuelling the increase in overall hiring. However, the Auto sector continues to witness a YoY decline. We expect the hiring activity to be stable in the coming months.” 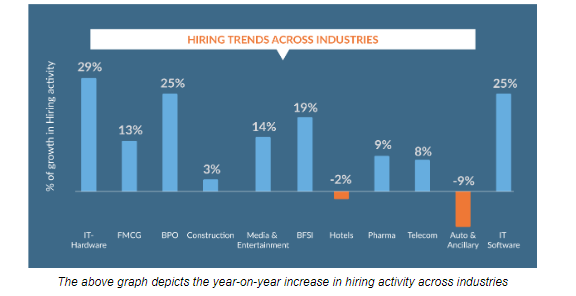 Recruitments across cities were largely positive during the month of November’19 with Kolkata witnessing a significant increase of 36% YoY, followed by Pune with an increase of 25%. Hiring activity in the capital city Delhi witnessed an increase of 20%.

The report clearly points out that the auto industry is still in the throes of a slowdown, with almost close to one lakh temporary workers in the auto components sector losing their jobs between October 2018 and July 2019 due to the slump in the auto industry.

Shweta is working as a Senior Features Writer with People Matters. You can reach out to her at shweta.modgil@gopeoplematters.com.
NEXT STORY: Innoviti names ex-Future Group executive as Chief Business Officer

The great reset – WFH a blessing in disguise for upskilling

LogiNext plans to hire diversely, aims for 50% women workforce by 2021