According to the ManpowerGroup Employment Outlook Survey released today, the survey of 4,612 employers across India indicates that the hiring activity is expected to remain positive. Employer confidence remains resilient and job seekers are expected to benefit from a favorable second-quarter hiring climate.

The second-quarter survey reveals that, although the hiring pace will slow, few staff reductions are expected. In fact, of the more than 4,600 employers surveyed in India, 0 percent expressed any expectations to reduce payrolls in the next three months.

AG Rao, Group Managing Director at ManpowerGroup India, said, “Indian job seekers are likely to benefit from the positive labour market during the April-June period. In the coming times, Technology will change the job market dynamics and individuals need to adopt skillset to continue to remain employable.”

Rao also pointed out that this year will see a sharp increase in demand for professionals with skills in emerging technologies such as Artificial Intelligence (AI) and machine learning. 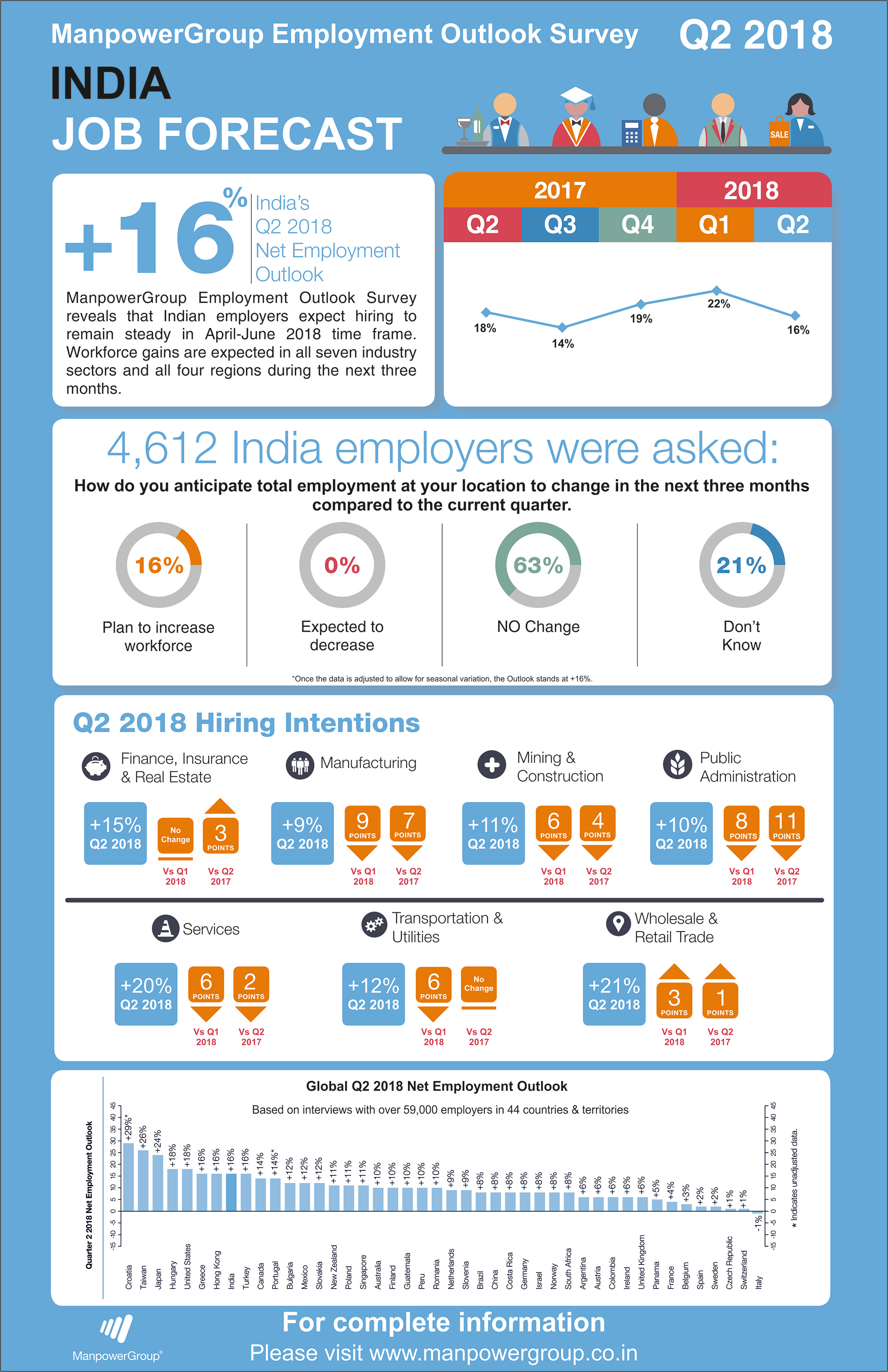 Employers expect to increase staffing levels in all seven industry sectors during the upcoming quarter. The strongest labour market is anticipated by Wholesale & Retail Trade sector employers with a Net Employment Outlook of +21%. Elsewhere, Services sector employers report upbeat hiring plans with an Outlook of +20%, while Outlooks stand at +15% and +12% in the Finance, Insurance & Real Estate sector and the Transportation & Utilities sector, respectively. Meanwhile, the weakest Outlook is reported by Manufacturing sector employers, standing at +9%.

Employers in all four regions expect to increase payrolls during the next three months. The strongest hiring prospects are reported in two regions with Net Employment Outlooks of +17% – the North and the South. Elsewhere, employers forecast a steady increase in staffing levels with Outlooks of +16% and +14% for the East and the West, respectively.

'Employers forecast varying levels of job gains in 43 of 44 countries and territories during the April-June time frame, including Croatia where employers, surveyed for the first time, report healthy hiring intentions based on unadjusted survey data.'

When forecasts are compared with those reported in the first-quarter, hiring intentions improve in 17 countries and territories, decline in 17 and are unchanged in nine. Among the countries and territories featuring seasonally adjusted data, confidence is strongest in Taiwan, Japan, Hungary and the United States, while the weakest hiring prospects are reported in Italy, the Czech Republic and Switzerland.

Across the Europe, Middle East & Africa (EMEA) region, workforce gains are planned in 25 of 26 countries. Hiring plans improve in 13 countries quarter-over-quarter, weaken in eight and are unchanged in four. In a year-over-year comparison, job gains are expected to improve in 16 of the 25 countries where comparison data is available, decline in six and are unchanged in three. Based on seasonally adjusted data, employers in Hungary report the most optimistic hiring plans in the EMEA region. Conversely, Italian employers report the second-quarter’s weakest hiring plans, as well as the only negative forecast among all countries and territories participating in the survey.

The ManpowerGroup interviewed 58,000 employers in 43 countries and territories and especially 46000 employers in India as their sample size for the employment outlook survey.