Talent demand in India grew by 8% in March 2018, as per RecruiteX, a monthly hiring trend report by recruitment portal TimesJobs. This is the highest growth registered by the recruitment index in the last four months. Compared to last year, this year has registered a 9% increase in overall talent demand.

The report noted that key industries and functional areas posted a significant rise in talent demand, thus contributing to the 8% rise in hiring activities in March 2018.

Here are the key findings from the report. 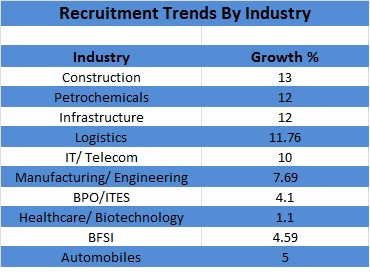 Ramathreya Krishnamurthi, Business Head, TimesJobs & TechGig stated, “In March 2018, the hiring activities recorded a sharp rise of 8% in the Indian market. This is the highest mark in the last four months and definitely a reason to cheer. Fresh policies, new projects resulted in this increased talent demand. A bulk of talent demand came from construction, infrastructure and petrochemicals sectors. In construction, specifically, most companies started hiring in March. Going by the trends from RecruiteX editions from previous years, we expect hiring activity to sustain its momentum in the coming months too.” 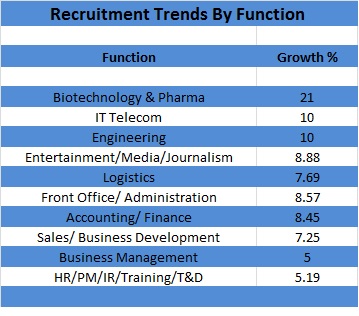 Professionals with 10-20 years of experience in demand

Shweta is working as an Editor with People Matters. You can reach out to her at shweta.modgil@gopeoplematters.com
NEXT STORY: Voltas ropes in new COO
Also Read: Pre-emptory actions needed to face job challenges in 2023: Josh Bersin Company
Also Read: India needs 18% GDP growth to to keep up with India's job market demands

Women at Davos’23: Parity in power, solidarity in sisterhood