According to the Monster Employment Index India, online recruitment activities have registered 13 percent year-on-year growth in the month of July 2017, which is the highest growth recorded this year.

Sanjay Modi, Managing Director, Monster.com, APAC & Middle-East, commented on the trend and said, “India is on the verge of transformation due to digital disruption and implementation of GST as a major economic reform. This has led to a positive trend in online recruitment activity. The Monster Employment Index for July has captured this sentiment and reported an uptrend of 13 percent y-o-y growth in hiring, the highest recorded this year.”

He adds, “Banking, Financial Services and Insurance sector has moved to a higher growth trajectory owing to digital disruption. However, e-recruitment in manufacturing has continued to be significantly below the corresponding period a year-ago. This necessitates strong policy impetus to develop manufacturing sector.” 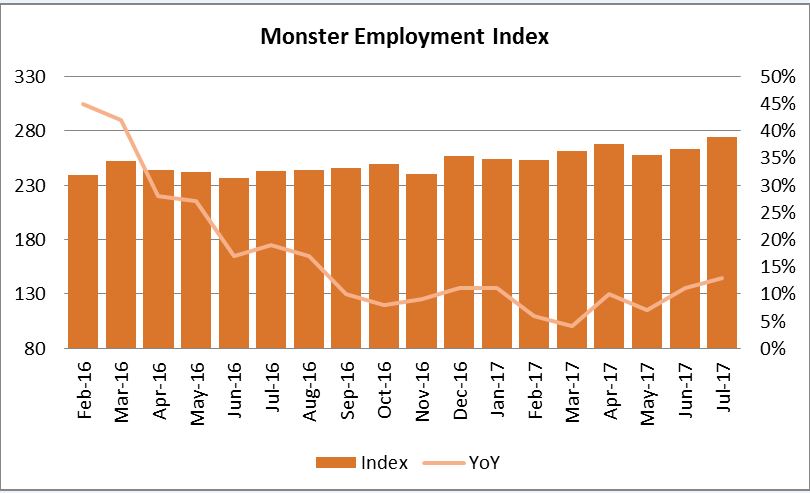 Online demand exceeded the year-ago level in twelve of the 13 occupation groups monitored by the Index.  Sales & Business Development saw an increase of 29 percent, HR & Admin was up by three percent and Marketing & Communications was up by eight percent, Engineering /Production saw an increase of 24 percent and Finance & Accounts (up 16 percent) continued to register a progressive increase in demand.

Transitioning towards formality: How do we break down informal work arrangements?

IT sector slowed down on hiring index by -6%: Naukri JobSpeak Report