As per LinkedIn’s inaugural Workforce Report (Professional Edition) for India, jobs requiring digital skills fueled employment growth in the first half of 2018. No wonder, of the job postings made by companies, those looking for Software Engineers had the highest share in H1 2018, followed by Application Developers, Solutions Consultants, Java Software Engineers, Business Analysts. In particular, job posts for Software Engineer were highest in 8 of the 14 cities included in the study. 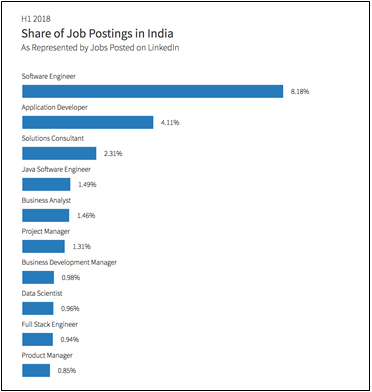 Overall, however, the report found that industry growth rates were lower on average compared to H1 2017.  In 7 of the 14 cities studied, Education led industry growth in H1 2018.  Industries that also grew faster this period, albeit marginally, include Construction, Software & IT Services, Finance, Manufacturing, Corporate Services, Transportation & Logistics, Recreation & Travel and Health Care.

Meanwhile, the Retail, Consumer Goods, Real Estate and Entertainment industries trailed, in line with weakening in the private services’ growth as observed in Q1 GDP data.

As far as the top skills is demand are concerned, these profiled for the top posted jobs in H1 2018 included a mix of core technical skills like coding and database querying as well as key soft skills like Management, Leadership and Team Management.

However while, the United States-India corridor witnessed the highest volume of talent migration in both directions in H1 2018, but in-demand talent exchange was greatest between Australia and India.

The Legal and Education industries led in H1 2018. Growth in these industries were driven by traditional roles such as Associates, Lawyers and Researchers for the former and Teachers and Research Assistants for the latter. However, the report also shows the effect of digital transformation within both industries with the emergence of Software Engineers amongst the top-10 occupations hired for. This was followed by the Design and Construction industries, while the Retail, Consumer Goods, Real Estate and Entertainment industries trailed with a slow annual pickup. 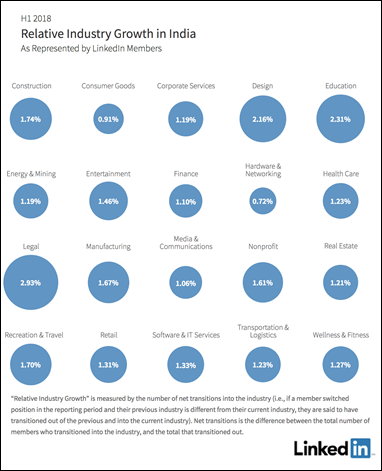 Software Engineer appeared in the top-10 list across 17 industries including those such as Transportation & Logistics, Retail, Wellness & Fitness, Consumer Goods, Education, Recreation & Travel.

Meanwhile, when it came to geography as a driver, Kalyan emerged as the top city gaining talent in H1 2018 with Retail leading industry growth in the region. Bengaluru came in second, followed by Gurugram. New Delhi ranked third in the list of top cities that lost talent in the same period. State capitals continued to offer an opportunity to India’s workforce, as Bengaluru, New Delhi and Mumbai emerged as India’s top 3 employment centrals in H1 2018.

The report analyzed a vast set of aggregated data on the platform, which includes 50 million members, 50,000 skills and 1 million companies in the country. It looked into localized trends in each of 14 of the largest Indian metro areas: Ahmedabad, Bengaluru, Chennai, Hyderabad, Kolkata, Mumbai, New Delhi, Pune, Chandigarh, Gurugram, Jaipur, Kalyan, Kochi and Noida.

Shweta is working as an Editor with People Matters. You can reach out to her at shweta.modgil@gopeoplematters.com
NEXT STORY: Tata Motors Corp Comm Head asked to proceed on leave on allegations of misconduct
Also Read: PwC to add 30,000 new jobs in India
Also Read: Pre-emptory actions needed to face job challenges in 2023: Josh Bersin Company