The objective of 'ASCEND' was to enable women leaders to take an informed, objective look at future growth aspirations as well as aid them in putting together a targeted development plan for their career aspirations

The program focused on equipping and empowering women leaders with greater self - awareness, skills and tools to manage their careers as well as creating broader visibility for themselves in the system

This issue required the organization to address it through a systemic lens. The company therefore initiated a targeted leadership development program named ‘Ascend’ in partnership with YSC.  This focused on providing women at the middle-management level with opportunities to increaseself-awareness, to prepare them for leadership roles in the future, and develop their career journeys.

For addressing such a challenge, HSBC embarked on this journey with a partner identified in YSC, a premier leadership consultancy.

The next step was to start a ‘partnership dialogue’ – an exercise that helped in sharpening the “why’s, what’s and how’s” of the program. The objective of this program was “to enable women leaders to take an informed, objective look at future growth aspirations as well as aid them in putting together a targeted development plan against a stated career aspiration.”

“The expectation was very clear to us,” says Gurprriet Siingh, the Country Head – YSC India “the program was not to be viewed by women as an initiative that would enhance their promotability.” The partnership dialogue was instrumental in shaping the design of the program and making the interventions participant-centric. The program was also designed to be self-sustaining and included key leadership stakeholders which ensured that the program was not an isolated exercise that would only have a momentary impact.

The program was designed to understand the psychological drivers of women in the workplace, have a perspective on what successful journeys looked like at that level and how they aligned to the leadership expectations. Both HSBC and YSC brought key insights from their own contexts to shape the program. For HSBC, data from internal people processes, leadership conversations and access to an internal study called “What women want” – a report that was geared towards aligning career expectations and understanding engagement drivers for women employees within the company – was instrumental. And for YSC, the launch of its “Cracking the code” report in partnership with '30% Club' and KPMG that focused on understanding the myths around how women progress to the top became significant.

The first phase of the program involved a profiling session through a biographical interview, a feedback session and a 4-way development planning conversation with the employee’s manager. The interviews were extensive in scope and were aimed at understanding the career journeys of the women employees and also delved into how they would navigate through the transition of becoming leaders and influencers. The key questions of the profiling session were centered on: What drives these women? What is their underlying awareness like? What underpins their judgment? How do they influence others? What are their strengths and development opportunities?

Common group coaching and developmental themes were also identified at this stage. Another element that was added to the stream of discussions related to the kind of organizational culture that has been shaping women leaders, which allowed HSBC &YSC to take a more systemic approach for the development of these women.

This phase of the program focused on the implementation of the interventions and specifically included workshops, peer coaching support and support from senior leader sponsors. The intervention was a combination of talks by business leaders and experts, workshops that shared critical conceptual inputs and helped the women leaders practice through role-plays and peer-coaching. 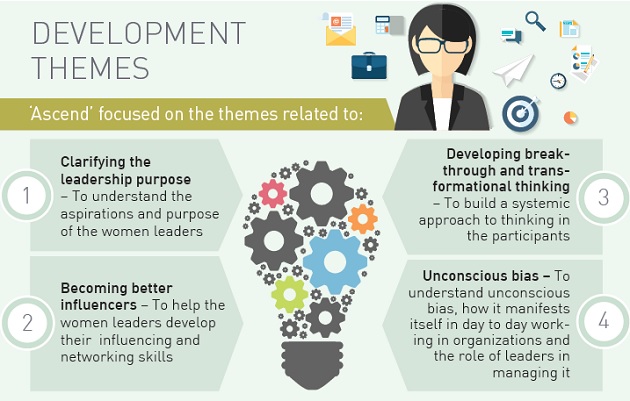 Three development themes were identified based on which the workshops were designed. The three themes were:

Each workshop had a good mix of reflection exercises and conceptual inputs, followed by sessions where business leaders were invited to share their insights and experiences. The participants were also encouraged to participate in exercises such as role plays etc. to practice the tools that they had learned. For example, in the session on influencing and networking, women were encouraged to record videos of one another to examine how they presented themselves. 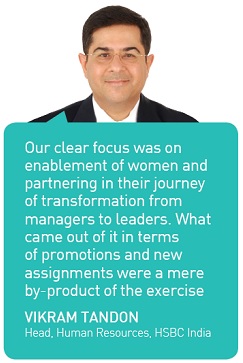 The participants were provided with developmental support beyond the workshop, in the form of YSC coaches and peer cohorts. This was to ensure that the participants got support from each other throughout the Ascend journey while strengthening ties with peers from across the organization.

Each cohort was also assigned  a senior leader, who became their mentor and sponsor. The experience sharing with the HSBC senior leaders helped the participants understand HSBC’s context and leadership truths for successful career journeys for the participants. The women were also given projects to work on under the guidance of their sponsorthat helped sponsors to understand the individual approach of women towards leadership. 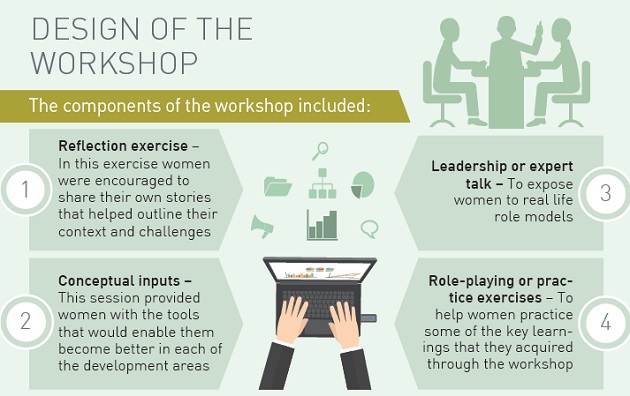 The third phase of the program focused on equipping and empowering women leaders with skills and tools to manage their careers. In order to facilitate this, HSBC and YSC held a career framing workshop that permitted the participants to achieve clarity on where they were in their career journeys, where they wanted to go and what it would take for them to get there. Enriching insights from the personal career journeys of senior leader sponsors also served as role modelling conversation for participants. This phase culminated with a closure conversation with the participant’s Line Manager on the participant’s experience, updated development plans, new aspirations and future career opportunities. 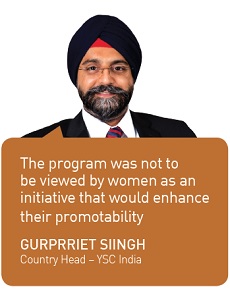 Unconscious bias was another theme that emerged during the progress of various interventions of Ascend, as a desired area of introspection. The development of women employees involved various stakeholders like line managers, fellow colleagues and the senior leadership, which necessitated a conversation with leaders and line managers on the theme of unconscious bias. A workshop was organized for the stakeholders accordingly and as part of this, theatre and drama was used to re-create workplace situations where common biases prevailed. This helped line managers and leaders to reflect on their experiences and role in building an inclusive culture in the organization.

The core project management team had dedicated professionals overseeing the program. The core team helped ensure that the executive committee members and speakers were socialized with the right messaging required for the program.

Both HSBC and YSC came together multiple times to continuously assess the efficacy of the program. The key to a successful partnership according to both the companies remained in open communication and trust. And in order to build it, the core team recommended regular conversations and build joint ownership for the growth of the women undergoing the program.

The program had a resounding impact. “Our clear focus was on enablement of women. What came out of it in terms of promotions and new assignments were a mere by-product of the exercise,” says Vikram Tandon, Head of Human Resources, HSBC India. Almost 25 percent of the batch was promoted to the next level. Over 40 percent moved to horizontal jobs or international assignments. It also led to other interventions with senior managers and line managers on building an inclusive culture in the organization. The success of the program led to a second such initiative on a younger cohort of women to focus on early career development.

J Jerry Moses is a senior content manager at People Matters. He can be reached at jerry.moses@gopeoplematters.com
NEXT STORY: Active Learning: A first step towards being a learning organization