Article: How not to layoff during the COVID-19 crisis

Before you aim to dive directly onto how not to precede a layoff, which is evident from the title of the article, here is an account of a meeting hosted by Bird (a micro-mobility company based in Santa Monica, California, founded by Travis Vander Zanden, a former top Uber executive) for its employees.

At 10:30 a.m., employees logged onto Zoom but were greeted only by a cracking silence. Meetings at Bird are usually always punctual and more frenzied Slack messages followed.

"Is there audio? Why can't I hear anything?" Alvauaje messaged her colleagues.

"We never start late," another employee remembers thinking. "This is strange. Something feels off."

For the next five minutes, employees stared at a sparse slide with a dark grey background that said only "COVID-19."

"It was not our brand color or font, which frankly was unsettling in a way I couldn't articulate," Alvauaje said.

Thinking there were technical difficulties, some employees logged-off and were never able to return to the meeting. Then, after five minutes of dead air that seemed like an eternity, a robotic-sounding, disembodied voice came on the line.

And within 120 seconds, 406 people in the company were laid-off.

"It felt like a Black Mirror episode,” said an employee.

"Lots of companies have to lay people off right now," said Jenny Alvauaje, a 23-year-old Bird data scientist who was dismissed after a year and half at the company. "People will recognize the companies who did it well and the ones that didn't. I hope Bird is the one that is remembered as one who did it poorly."

“People will recognize the companies who did it well and the ones that didn't.”

Without a doubt, the COVID-19 crisis is forcing many businesses to confront a new reality

Measures such as layoffs, furloughs, and freezing benefits and raises all have an impact on both corporate and employer brands, but how these actions are perceived will depend on the way they are executed and communicated.

The earlier recession of 2008, forced many companies to make deep cuts to their workforces. Numerous retailers like Mervyn’s and Circuit City Stores Inc. closed locations, filed for bankruptcy or shut down altogether. Even companies like Yahoo!, Google, American Express, and Motorola have had to cut their workforces.

However, when the economy started looking to improve, and companies set the operations in full-swing, companies again found themselves in a quandary - winning the so-called war for talent: how to attract and retain the best and brightest.

In 2009, Christopher D. Zatzick, Mitchell L. Marks, and Roderick D. Iverson, wrote an article, “Which way should you downsize in a crisis?” 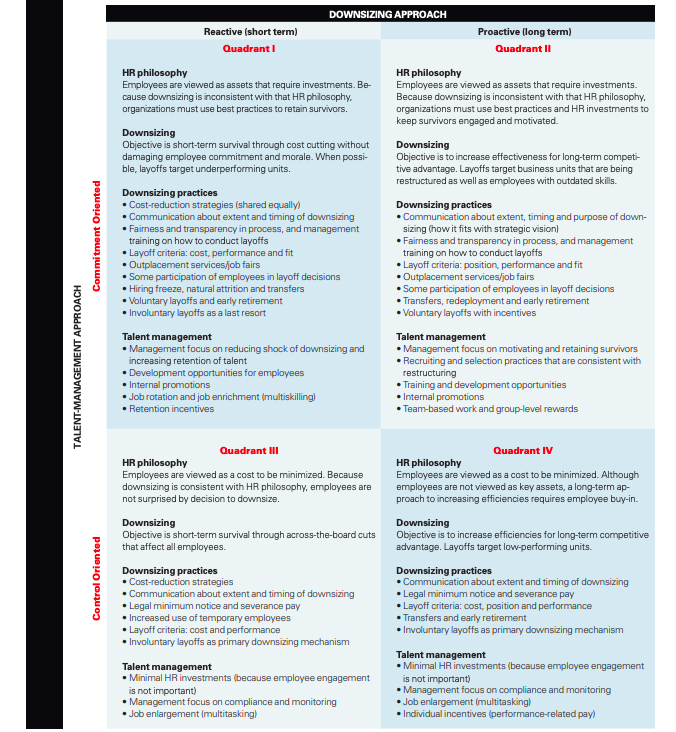 The framework looks at two important variables: the type of downsizing (reactive versus proactive) and the company’s approach to managing employees (control-oriented versus commitment-oriented). By first understanding an organization’s position with respect to those two dimensions, managers can devise an optimal strategy for downsizing.

The authors did acknowledge the fact that downsizing does not guarantee any performance returns. Instead, layoffs often result in employees’ broken trust, increased burnout and decreased morale. Hence, companies need to understand how to manage the process of workforce reduction to attain its benefits while avoiding its ancillary costs.

If you zero in on the four quadrants, you will find a few common downsizing practices in commitment-oriented downsizing:

Recently, Brian Chesky, CEO & Founder of Airbnb was in the news. Yes, the company laid-off 1,900 employees. However, people around the world applauded Airbnb conducting layoffs in the ‘right way’.

Here are a few excerpts from the Chesky’s letter:

This is my seventh time talking to you from my house. Each time we’ve talked, I’ve shared good news and bad news, but today I have to share some very sad news.

When you’ve asked me about layoffs, I’ve said that nothing is off the table. Today, I must confirm that we are reducing the size of the Airbnb workforce. For a company like us whose mission is centered around belonging, this is incredibly difficult to confront, and it will be even harder for those who have to leave Airbnb. I am going to share as many details as I can on how I arrived at this decision, what we are doing for those leaving, and what will happen next.

Let me start with how we arrived at this decision. We are collectively living through the most harrowing crisis of our lifetime, and as it began to unfold, global travel came to a standstill. Airbnb’s business has been hit hard, with revenue this year forecasted to be less than half of what we earned in 2019. In response, we raised $2 BN in the capital and dramatically cut costs that touched nearly every corner of Airbnb…

…. It was important that we had a clear set of principles, guided by our core values, for how we would approach reductions in our workforce. These were our guiding principles:

… Our goal is to connect our teammates leaving Airbnb with new job opportunities. Here are five ways we can help:

…I am truly sorry. Please know this is not your fault. The world will never stop seeking the qualities and talents that you brought to Airbnb…that helped make Airbnb. I want to thank you, from the bottom of my heart, for sharing them with us.

In fact, Brian took one-step ahead and invited companies who are hiring to support employees who were laid-off from Airbnb.

If you notice, this letter from Brian Chesky has all the elements that were mentioned in the four-quadrants downsizing model - communication, transparency, and an after job support.

Past research has shown that a company’s consideration for employee well-being is linked to its performance after downsizing, and other studies have identified the importance of various best practices, such as communicating with employees clearly and candidly.

But in a crisis, should companies see layoffs as the cure-all solution?

A 2010 study of company choices during recessions by Ranjay Gulati of Harvard divided organizations into those that were ‘preventative’ (which is to say focused on severing costs early in the recession) and those that were ‘progressive’ (those that focused on cutting costs mainly through ‘operational efficiency’ as opposed to cutting jobs), eventually finding that it was the following group (only 23 percent of whom cut costs, as opposed to 56 percent of the prevention-focused companies) that fared better at recession’s conclusion.

In fact, layoffs have been quite expensive to companies. After all, every employee represents an investment in hiring costs and training, which becomes money lost once that worker is laid off, and then spent again when hiring starts again. Add in the cost of severance (and possible lawsuits in these litigious days) and the costs start to ascend.

So how do companies prepare themselves if the possibility of recession post-COVID-19 materializes?

Take this case study of Honeywell during the recession of 2008.

“To understand that reasoning, look at what really happens when you do layoffs. Each person laid off gets, on average, about six months’ worth of severance pay and outplacement services. So in essence, it takes six months to start saving money. Recessions usually last 12 to 18 months, after which demand picks up, so it’s pretty common for a company to have to start hiring people about a year or so after its big layoff, undoing the savings it began realizing just six months earlier. Think for a minute about the costs of a layoff the way you’d think about a traditional investment in a plant or equipment. Imagine going to your boss and saying, “I want to spend $10 MN on a new factory. It will take us six months to break even on it, and then we’ll get to run the factory for six months. But at that point, we’re going to need to shut it down.” You’d never do that—yet when it comes to restructuring costs to lay off employees, everyone seems to think it makes sense,” said David Cote, in an article published in Harvard Business Review in 2009.

Honeywell asked every worker to take a series of unpaid weeks off during the first half of 2009. The number of weeks varied by the business. The average furlough was three to five weeks, taken in one-week blocks and business leaders reassessed their situations every few weeks to see if additional furloughs were necessary. During the first week or two, we received positive feedback: People felt good about making sacrifices because they knew they were helping to save jobs—maybe their own, maybe a colleague’s. As the furloughs kept going, however, their attitude began to change. Some people complained, “I can’t live on this salary.” Some concluded that they wouldn’t have been among the people laid off, so they started to resent the sacrifice.

Cote shared, “During the fourth quarter of 2009 our sales forecasts stopped going down, and by January of 2010 my team and I were starting to talk about recovery. As orders began to pick up, it was clear that we were well prepared in comparison with our competitors: Our inventory and delivery times were better, and because we had held on to our people, we found it easier to win new business.”

Different businesses are experiencing the ongoing uncertainty in fundamentally different ways and the leaders better know whether layoffs will be critical for their business continuity programs or not. However, after reading through the downsizing model, Airbnb and Honeywell case studies, here are some points you should think before carrying out a layoff:

Anushree is Senior Manager–Research & Content Strategist APAC. She predominantly leads and manages research and branded content. HR Technology, Diversity & Inclusion, and Employee Experience are some of the key themes Ansuhree actively follows and writes about. She holds an MBA in Human Resource Development from Delhi School of Economics. You can reach her at anushree.sharma@gopeoplematters.com linkedin.com/in/09anushree twitter: @AnushreeS09
NEXT STORY: Milestones vs full stops
Also Read: CMS IT Services appoints Sanjeev Singh as CEO and Managing Director
Also Read: Tata Trusts hires Siddharth Sharma as CEO, Aparna Uppaluri as COO