Many organizations have recently moved away from the bell curve distribution of performance ratings. Some of the reasons cited for this change are: it breeds unhealthy competition, it’s the most hated process by managers and employees alike, it promotes political behaviours like schmoozing, and it does not add value to the overall performance management process.

Another reason which deserves attention is the recent research and thinking that shows the increased prevalence of the Power law distribution in performance, instead of the normal / Gaussian distribution a.k.a the bell curve. (The Power law is more commonly known as the Pareto law or the 80/20 rule)

In simple terms, a bell curve distribution for performance means a large chunk of employees perform at or around the mid-point / average level, and a small number of employees are there at both ends of the performance spectrum – performing either outstandingly or poorly.

Let us take a sales example and understand this better. If the performance of salesmen (selling insurance policies) follows a normal distribution, it will look like figure 1 (bell-shaped) where most of the salesmen perform around the average of 525. And, if it is a power law distribution as shown in Fig. 2 (kind of an L shaped curve), then most of the salesmen are performing below the average of 398, and a few “superstars” towards the tail-end of the horizontal axis are contributing the biggest chunk.

An interesting research conducted by Aquinis et al , revisits this assumption of a bell curve. According to their research, individual performance follows a power law distribution, where a small percentage of individuals (superstars) make a disproportionately large contribution to the results. They say that the top quartile of performers contributes about 40-50% of the total results, and a large percentage of individuals lie below the statistical average performance.

At first glance, this is disturbing! Does it mean organizations have got performance management completely wrong till now?

Not necessarily! Keep these 2 things in mind:

1. The word “average” used in their research implies a “statistical average” and not “average” as we mean in daily usage, where it usually implies “commonly seen” or “typical”. In a power law distribution, the variation between the highest performers and average performers is large (refer to Fig.2), therefore a lot of people perform below the statistical average performance level. That does not mean that these people are non-performing, or that they are not adding any value. It simply means that there is a large gap between the highest and the average performance levels.

Manufacturing jobs typically use manual labour and have infrastructural / technological constraints, which forces performance to remain within the bounds of a normal distribution, and does not let superstars emerge.

What could have been going wrong? 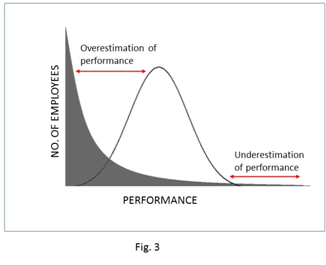 Why should we be worried about the distribution?

The problem of measuring performance is actually at the core of the question – Does individual performance follow a normal distribution or a power law distribution? In many jobs it is difficult to measure performance objectively, and subjective measures of performance are used.

How do we correct it?

A big challenge that power law distributions bring to the fore is the increased perception of unfairness and inequity. There is a human tendency to “keep to the middle”, which the bell curve has been satisfying for very long. However, the reality is painful – that there are elite performers who need to be rewarded accordingly. Organizations which have been “keeping to the middle” will find it very difficult to manage this transition. There is no magic bullet, and the journey will be agonizing. Maintaining a sensitivity to human emotions, while balancing business interests will be a critical skill needed for HR practitioners to make it through.

View from the Top | Trina Sunday of Reimagine HR

Will a recession force workers back into the office? One CEO thinks so