58% of the companies have spent either exactly as the prescribed CSR or more than the prescribed CSR -  a good improvement from the FY14-15 where this percentage was 48%. However, about 39% of the private unlisted companies failed to meet the CSR compliance that requires 2% of the average net profit of the previous three years to be spent on CSR projects. This has come up in a report on CSR spend analysis of private limited companies by CSR platform NGOBOX.

The report is based on the analysis of 305 privately owned unlisted companies, including a few of the biggest brands like Google, IBM, Microsoft, Barclays, HSBC, Sony, LG, Samsung, Visa etc operating in India. The report brings out analysis of the prescribed CSR spend and actual CSR spent of financial year 2015-16.

However, 29% companies went beyond mandatory CSR limit. While almost 2% of the companies did not spend any amount on the CSR, despite having mandatory CSR spend requirements. This report was compiled on the basis of availability of CSR data as of 31st January 2017 from relevant sources and companies with prescribed CSR of Rs 15 lacs or above. 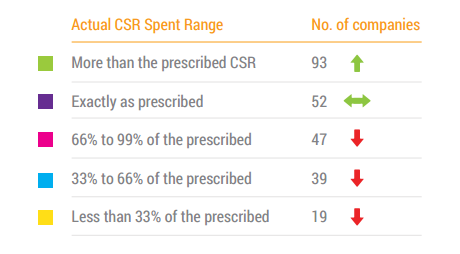 According to the analysis, Education & Skilling were the areas where the most CSR spending happened. Almost 50% of projects took place in this area followed by Poverty Alleviation, Malnutrition, WASH, and Healthcare where 23% of the actual CSR budget was spent. Overall 7% of the actual CSR spent was on administrative expenses.  Areas like benefits to armed forces veterans, war widows, urban slum development etc. were not able to get much attention of CSR committees of these companies.

Moving on to the unspent CSR, 118 companies did not spend the prescribed amount on the CSR and 24 companies (20% of those who did not spend) did not explain the reason behind their unspent CSR budget, whilst 19% of the companies suggested that their project begins next year. Under the Companies Act, it is mandatory to give a reason for unspent CSR amount. 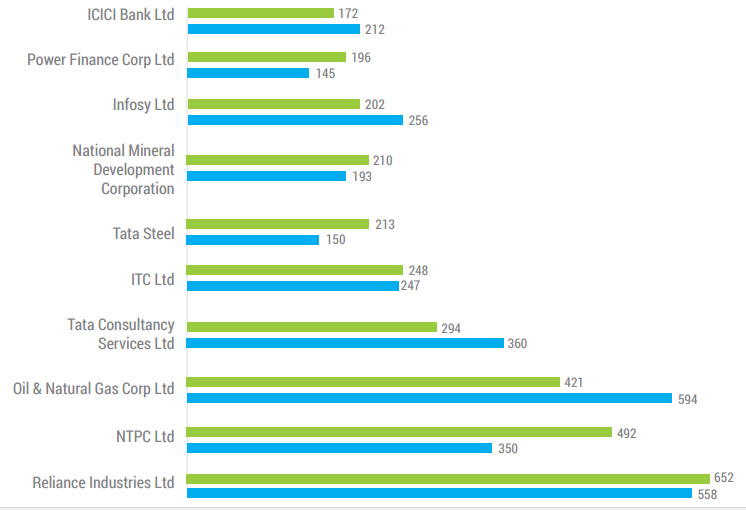 These 10 companies together spent Rs 3350 Crore in CSR while their prescribed CSR was Rs 3064 Crore. This is almost 9% more than what the Section 135 asks for.

According to the Companies Act 2013, every company having net worth of Rs 500 crore or more, or turnover of Rs 1000 crore or more or a net profit of Rs 5 crore or more during any financial year shall constitute a Corporate Social Responsibility Committee of the Board consisting of three or more directors, out of which at least one director shall be an independent director.

In conclusion, the report said, the overall quality of reports and availability of data has improved a lot from the last year and companies have become more serious at CSR reporting front. Despite the fact that the Section 135 of the Companies Act mandates companies to prepare CSR report (as part of the annual report) in a particular format, more than 30 companies have not followed the format and went on hiding (moreover ignoring). crucial information like project location, implementing partners, project specific budget and spend etc. A lot of discrepancy was seen in the reported data when accounting for actual CSR spend and project-wise CSR spend of companies. A few companies spent the unspent amount of last year’s CSR budget in this financial year (15-16) and have calculated it as the actual CSR spend of FY 15-16, taking their actual CSR spend much higher than the prescribed CSR of this FY. Sanitization of data was required to present the clear picture of the financial year. Even though the Section 135 of the Companies Act mandates companies to give names of the implementing partners in the report, many companies have not given the names of implementing partners and have used the term ‘NGO partner’ or ‘various NGOs'.