The Maternity Benefit Amendment Act to increase the duration of paid maternity leave to 26 weeks passed in 2017 to benefit the women workforce has proven to be counterproductive in reality.  As per the latest report by TeamLease Services, the immediate repercussion of the amendment is not in favor of the women talent. The report titled ‘The Impact of Maternity Benefits on Business and Employment’ says that the bill will cause an estimated job loss of 11 lakh to 18 lakh in FY18-19 across the 10 sectors considered for the study. While the bill also impacts the currently employed women workforce, the 2017 amendment bill will significantly hamper the entry of new women into the workforce.

As of 2017, women’s share in the Indian workforce is at 27 percent, out of which 14 percent of the overall women workforce is employed in the formal sector. However, only 3 out of the 10 sectors covered under the study believe that the impact of the bill will be positive. 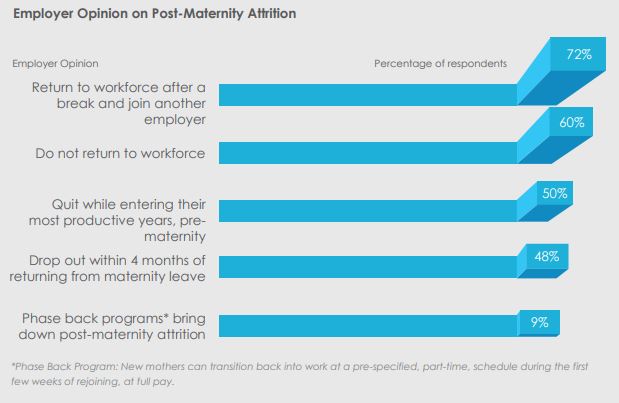 Source: TeamLease Report- The Impact of Maternity Benefits on Business and Employment

Interestingly, large companies (both private & public sector) as well as medium-sized public-sector companies are more enthusiastic about the amendment and are likely to hire more women as they believe that financial and opportunity cost of replacement is higher than the cost of retention. 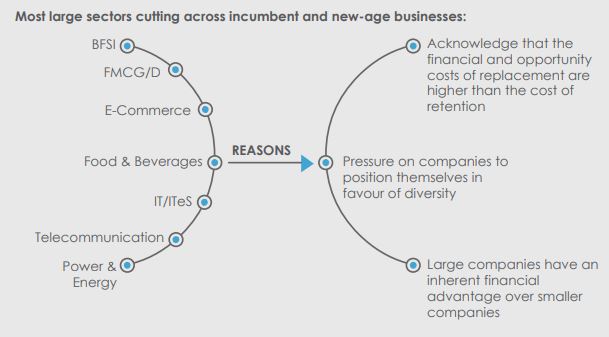 On the other hand, start-ups, SMEs, medium-sized multinational companies and sectors with legacy HR practices and closely-held family-run businesses across sectors perceive the amendment as a deterrent and would hence look to reduce the intake of women.

The report further states that there will be fewer takers for women in the workplace in the short term (up to 1 year) and the bill will lead to a potential job loss of about 1.6 percent to 2.6 percent across sectors.

As businesses have become hesitant to hire women, especially for permanent jobs or long-term projects, they are ignoring the benefits of adding women to the workforce. According to the report, raising the female Workforce Participation Rate can potentially result in the share of women in jobs going up to 35 percent, further increasing the GDP growth by 16 percent to 60 percent, by 2025. If more and more companies realize the advantages of adding women to the workforce, India could potentially add 6.8 crore women to its workforce by raising the rate of female workforce participation.

She further adds that as with most reforms of such scale, the mechanics of change are as critical as the reform itself. It would require a participative approach. Rituparna suggests that the government should support the corporate at every step by allowing flexibility as well as financial support so that all types of companies can be a part of the endeavor without hesitation.