‘Men cannot be sexually harassed!‘ said one of my colleagues while we were engaged in a watercooler chat, discussing sexual harassment at the workplace.

I was taken aback by that statement because “male sexual harassment” is often overlooked as a myth and hence never gets addressed at the workplace. According to various media reports, men -as much as women, are victims of sexual harassment at workplaces! According to a survey that was conducted among 1,100 male employees pan-India, threw some surprising facts like mostly females (60 percent) are the victimizers in case of men being harassed at the workplace.  The survey shows that 53 percent of the victimizers were from the middle level of management, while 20 percent of them represented the top management. In fact, according to statistics, 22 out of every 100 employees are sexually harassed at some point in their career. Of which, nine are harassed more than three times and 5 out of the 22 harassed are men. Similarly, in North America, the Equal Employment Opportunity Commission (EEOC) reported that in 2015, 6,822 sexual harassment claims were filed with the EEOC of which 17.1 percent of those cases were filed by men.

A reason that contributes to male sexual harassment to be perceived as a myth is that men generally do not report about getting sexually harassed at work. Men may not report their harassment or file a claim because they are afraid of being mocked by coworkers.  They may believe that a woman can't sexually harass men, or that being harassed by another man implicates their sexuality.  They may fear being embarrassed if details of the harassment were leaked, particularly if they believe that they should be able to handle the issue themselves.  POSH as evident from title offers a robust system to protect women from sexual harassment. Unfortunately, unlike their female counterparts, male workers cannot route their sexual harassment complaints through the POSH Act since it provides cover for female workers only. Hence another reason that prompts men not to complain about sexual harassment is the absence of a formal law.

While we talk about how the safety measures taken to safeguard the women of our country are just not adequate, some light needs to be shed on how the scenario is equally scary on the other end of the spectrum as well. Here are some of the cases highlighting the sexual harassment faced by men at work:

Possibly the most high-profile sexual harassment case filed against a woman was that against Britney Spears. The 'Toxic' pop-star was sued by her former bodyguard Fernando Flores for sexually harassing him. Flores claimed that she had made unwanted sexual advances to him. Viji Hari, CEO, and Co-Founder of KelpHR shares a story from her book BCC: Behind Closed Cubicles: For Employees, Managers and HR Professionals, where a woman boss was harassing a male member. Colleagues and family member perceived the man to be having an affair with the lady boss and hence refused to believe him and which led him to suffer in silence. Last month in September, United Nations dismissed United Nation dismissed  Ravi Karkara, Senior Advisor on Strategic Partnerships and Advocacy to the Assistant Secretary-General and Deputy Executive Director at UN Women on grounds on sexually harassing a man. According to the reports, he was accused of making obscene gestures and sending pornography links and indecent images to the male employees.

While the Indian media and entertainment industry is trending on Twitter under the #MeToo campaign where women are coming out of the closet and reporting sexual harassment cases against the perpetrator. However, our attention was caught by the following tweet where a male journalist complained about getting harassed by a female interviewer. The entire incident made us think that the #MeToo movement is not only about highlighting the harassment faced by women but by men too. 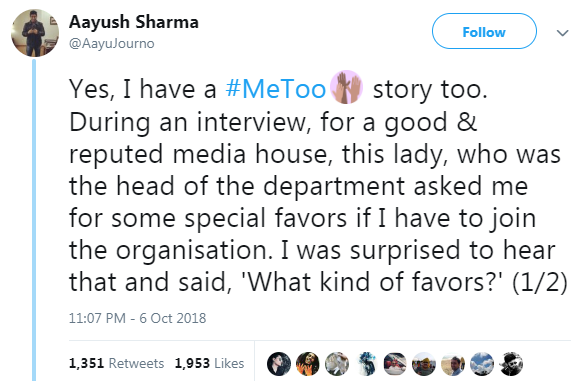 In our interaction with Hari, she shared same-sex harassment is too prevalent in workplaces. Some men take advantages of other men merely because they are homosexuals or they perceived other men as beta males!” Hari says, “While our culture makes it difficult for men to speak up about sexual harassment. But that has got to change!” The first step in dealing with a complaint about workplace sexual harassment is to keep an open mind. An employer has a duty of care towards both sexes, which means treating them both sympathetically and respectfully. An employer also has a responsibility to its employees to maintain mutual trust and respect, and treating either the complainant or the alleged perpetrator unfairly and unreasonably could lead to claims of constructive dismissal.

Deepika Bhardwaj, documentary filmmaker and social activist shares that, “A man cannot complain of sexual harassment. What's defined as verbal, physical, mental sexual harassment as per the law can happen both ways. But the law doesn't recognize a female as a perpetrator, and this is true of all gender-based crimes in India. I feel though the law doesn't recognize, companies should have gender-neutral policies. One problem with dealing with cases where men complain is that they are too scared to complain. Because even if they do, a woman can turn around and say it is he who harassed him and turned the tables on him. A case shared on Twitter recently by a man is a witness of that. I have also handled a case where this young boy has been incessantly stalked by a girl, but then he can't complain because if he does, he fears a rape case.” She further says that these incidents should be brought to the forefront because until cases come out, laws won't change and until laws won't change, such victims won't get justice.

Anushree is Senior Manager–Research & Content Strategist APAC. She predominantly leads and manages research and branded content. HR Technology, Diversity & Inclusion, and Employee Experience are some of the key themes Ansuhree actively follows and writes about. She holds an MBA in Human Resource Development from Delhi School of Economics. You can reach her at anushree.sharma@gopeoplematters.com linkedin.com/in/09anushree twitter: @AnushreeS09
NEXT STORY: The fact of the matter- Can India be an AI powerhouse?
Also Read: Nine Indian companies make it to the 2023 Bloomberg Gender-Equality Index
Also Read: Not even 1 in 4 Indian workspaces equipped to accommodate PwD: Study

Will 2023 be the year of the employee: A chance to tell your story