In a world that is anxious about data leaks, breaches, and alleged data manipulation, data protection has been at the center stage for the past year or two. The media landscape has been inundated with stories on topics such as data protection/privacy, General Data Protection Regulation (GDPR), data breaches, delayed disclosures of past data breaches by companies, and so on.

As India builds its data protection regime, the focus of the narrative is on ensuring the security of citizens’ data, data protection, and localization.

The essential ingredients for a 'state of the art' law are already in place and there is a lot to learn/adopt from GDPR, which has been in force for more than a year now

On the domestic front, in a unanimous verdict over a year ago, a nine-judge bench of the Supreme Court declared privacy a fundamental right that is intrinsic to life and liberty and thus comes under Article 21 of the Indian constitution. Following that came the recent judgment on the Aadhaar case wherein, while upholding its constitutionality, the SC struck down1 Section 57 of the Aadhaar Act 2016 that allowed the use of Aadhaar data by private entities. The Reserve Bank of India has also mandated storing Indian users’ payment data only in India by October 15, 20182 and did not extend the deadline even on the request of some big names like Google3. The noise about data localization is getting louder by the day with a big player like WhatsApp confirming setting up data servers in India for their payments operations while some others want the issue to be reexamined. The narrative around localization may be due to legal safeguards from local laws, carrying out investigations against data breaches, and enhanced law enforcement; but only localization cannot ensure data protection.

Based on Justice B N Srikrishna committee’s report on data protection, a draft data protection bill was submitted in July 2018. The bill borrows quite a lot from GDPR, and makes interesting recommendations on how organizations should collect, process, and store citizens’ data; but leaves significant gaps on giving full liberty to the government to process data, data subjects being left to deal with the implications of a data breach after withdrawal of consent, thereby completely diluting their rights.

Notwithstanding when a data protection law comes into force in India, an informed conversation on the issues involved is very much needed. The various stakeholders in the data ecosystem are:

The plight of data subjects in India

In the maze of data management, more often than not, the data subject is on the losing side as their data can be grossly misused. While foreign companies make headlines for being held publicly accountable when a data breach takes place, Indian companies in sectors such as telecom, banking and finance, retail, hospitality, and many others, indulge in data misuse with impunity.

Data is not only the new oil but also a currency in the global economy, which puts it at risk of theft and misuse

Technology and data as a double-edged sword

While technology has helped automate taking consent, issuing privacy notices, and tracking data subject requests, will consent forms and privacy notices be made simple enough for data subjects from various sections of society to grasp and make an informed choice?

Data is not only the new oil but also a currency in the global economy, which puts it at risk of theft and misuse. At the same time, the possibilities of using data for human benefit are immense. The real challenge is to strike a balance between individual privacy and the extent to which technologies such as machine learning, artificial intelligence, automation, big data and analytics can be applied.

Culture and maturity of countries and regions

Many countries/regions in the developed world have long experience with data privacy. The EU had the 1995 Data Protection Directive, which guided discourse and decisions before GDPR became a law. Compared to that, data protection in India is at a rather nascent stage. The way EU residents value their ‘right to be forgotten’ is rooted in their long experience and the assumption that people should get a second chance and should the need arise, their past data must be erased.

The Business and Financial Imperatives

It is given that compliance to global privacy laws will increase the cost of doing business. An estimate5 indicates that the top Fortune 500 global corporations may spend in excess of USD7 billion to comply with GDPR, and many risks may still remain unaddressed due to lack of understanding or inadequate explanation of the law. A contrarian view is that this impact will be short term and companies that comply with privacy laws will command a premium over their competitors as compliance will be a competitive advantage.

The way forward to handle some of the issues raised above is tabulated in the below table. 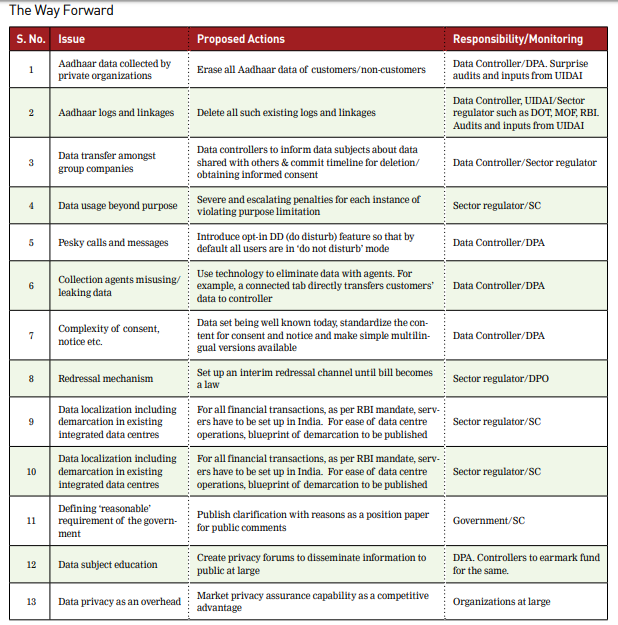 Dr. A. K. Chawla, an alumnus of IIM Ahmedabad, is a Data Privacy, HR and Management Consulting professional with more than four decades of experience. He is currently engaged in a large transformational program of TCS to ensure alignment and compliance with GDPR.
NEXT STORY: ROI on HR Technology, what works and how to measure it
Also Read: Salaries in India expected to increase by 10.4% in 2023 : Aon Survey
Also Read: Corporate HR loans that can help talent retention