“I don’t believe in failure. It is not failure if you enjoyed the process”- Oprah Winfry

Perhaps the simplest words to explain an incredible zeal to succeed. Role of women in the society has been seeing a paradigm shift ever since women became self-aware.

Women-owned entities in the formal sector represent approximately 37 percent of enterprises globally. It is noteworthy and remarkable to say the least. The recent Global Entrepreneurship Monitor Survey 2016 (GEM) found 126 million women starting or running businesses, and 98 million operating established (over three and a half years) businesses in the world, That’s 224 million women impacting the global economy. Not to mention that this survey counts only 67 of the 188 countries recognized by the World Bank. An encouraging number if not superlative.

So what drives both urban and rural women towards entrepreneurship? Maslow’s pyaramid to self-actualization comes in handy to understand this shift. 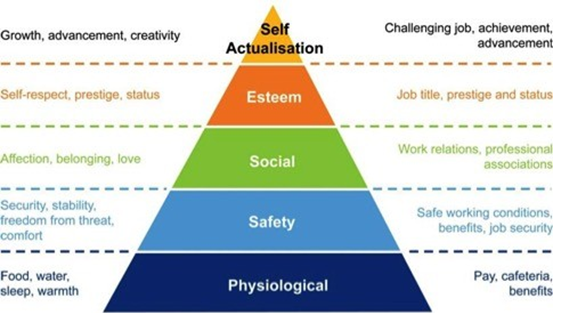 In India, women comprise about 30 percent of corporate senior management positions, which is notably higher than the global average (24 percent).

But in the overall workforce, India is one of the worst countries in the world — 113th out of 135 — when it comes to the gender gap.

The reason behind this is as follows- Whilst jobs provide basic needs at the base of the pyramid like food, water, sleep warmth (pay, cafeteria benefits etc in offices) there seems to be a huge barrier at the next level of the pyramid-Safety. With recurrent sexual harassment and discrimination at the work place a woman feels unsafe, socially discriminated (it is not a job of a woman her male colleagues constantly and laughingly convey time and again) against and disrespected (promotions don’t come easily). Self-actualization is a far-gone dream for many women who find it difficult to overcome these challenges of the work place.

However, the need to self-actualize takes grip once the woman decides to step out of her pre-decided role in a patriarchal system. Whilst the above is not entirely true in all corporates and work environments since HR Practices are taken very seriously in progressive corporates, it holds true for most others that still believe a woman belongs in the house, kitchen and bed.

It is this need to realize their highest potential that motivates many women to start up their own ventures. Again not the easiest road but definitely she has chosen for herself. Women can find a work-life balance in their own venture. They can attend to both their family (another need that helps them feel loved and gives them a sense of belonging) and work (something that gives them intellectual and psychological satisfaction) more methodically.

Studies have shown women entrepreneurs tend to be more successful because of their trusted status in the community.

Many educated women today have made a significant mark as entrepreneurs in their chosen fields. However, what has not been recognized is that many uneducated women are also enthusiastically raising family incomes through micro ventures. These women also inspire other women in their localities to pursue their dreams through entrepreneurship at the grassroots level.

The need to contribute towards bettering their quality of life, drives these women and without realizing it they begin to self-actualize. What’s more amazing is that women unlike men tend to motivate other women around them to do better thus creating more options of employment and even start-ups leading to bettering not only their own financial status but helping the economy grow.

This being said there are barriers women in developing countries face- those of social inequality, less financial support for their ventures (eventhough there are schemes to help women start their small businesses), acceptance of their need to venture out and many others.

Women are fighting these barriers and overcoming obstacles to attain their fullest potential. Women are still seen venturing into domains largely untouched by their male counterparts in terms of businesses. There are cultural and societal norms that hinder equal participation of women in ventures that men undertake.

But things are slowly changing. Today women entrepreneurs constitute 10 percent of the total number of entrepreneurs in the country. Not a huge number but definitely encouraging.

More financial institutes are realizing the merits of investing in women entrepreneurs’ ventures. One of the most obvious reasons to invest in women leaders in India is that women control the vast majority of household spending. So unless you are a business that is focused mostly on men, women are more likely to better understand customer perspective.

Another is that women are often better at building long-term relationships. Lasting relationships benefit a business tremendously, as only so much can be achieved without trust… with employees, customers, suppliers, shareholders, government, etc.

To conclude self actualization is synonymous with empowerment in women. It is a wheel that has been set in motion.

Women are becoming self-aware and command their needs to achieve their highest potential be recognized, acknowledged rewarded and respected.

In conclusion again quoting Oprah Winfry-“If you don’t’ know what your passion is, realize that one reason for your existence on earth is to find it.”

Malini is a published author residing in The Netherlands happily pursuing painting and writing professionally. She is a author of the book 'Flotsam of the Mind'.
NEXT STORY: The glass ceiling: Beyond the myth vs reality debate
Also Read: Why do we need to design more gender-inclusive cyberspaces?
Also Read: Meritocracy at work: The culture that breeds equality while honouring differences

Dr Arvind Agrawal and TV Rao's 'The Crucibles of Change makers in HR': A journey to authentic leadership

HR trends in 2023 that will push the envelope even further