There was a time when graduating from a reputable academic institution meant a warm welcome to a safe professional journey with a steady climb up the corporate ladder and a respectable retirement from a grateful organization. However, as analog initiatives have increasingly yielded to digital pursuits, business lifecycles have become increasingly susceptible to ‘disruptive’ technologies and ‘seemingly secure’ careers are wavering under the ‘relevancy’ scrutiny. Gaining a degree is no longer considered ‘essential’ for success in an era where ‘abandonment’ has become ‘fashionable’ due to the ‘glaring’ achievements of ‘dropouts’, who continue to receive ‘rock star’ status in the startup world. This is being reinforced by the huge influx of MOOCs (Massive Open Online Courses) and core emphasis on specific skills, rather than, broad educational credentials.

Consequently, today’s multigenerational workforce is looking at existential challenges that are more pronounced and transformative than the earlier professionals, e.g., narrowing occupational paths, re-skilling imperatives, multiple careers, early retirements, forced entrepreneurship, etc., especially, as Artificial Intelligence (AI) progressively conquers the ‘strictly humanistic’ domains within the workplace and relentlessly pushes the threshold for ‘relevance’ to the upper echelons of cerebral application, as shown below: 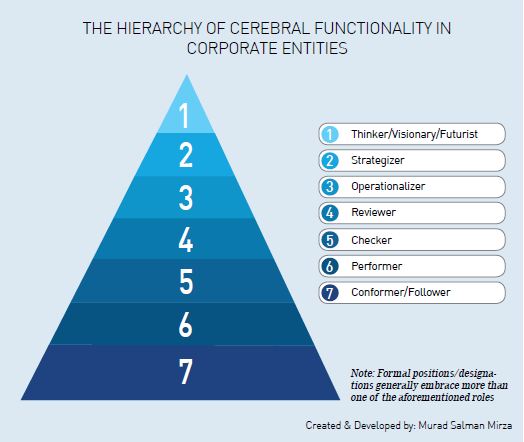 More and more of the repetitive/physically demanding/minimally diverse jobs/roles/functions are being relegated to ‘smart’ machines while innovative thinking/astute strategizing/creative application are being heralded as the ‘last’ bastion of ‘human relevance’ in the workplace. Most of the respective impact is being felt by mid-career professionals who are haunted by the notion of ‘45 is the new 65’ as they brace for groundbreaking technologies nullifying the need for large workforces in progressive organizations that are looking to minimize their fragility exposures, as depicted below. 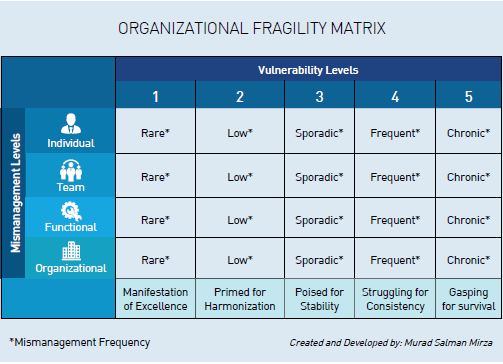 The aforementioned matrix reflects the various vulnerability levels and the corresponding incidence rate of ‘humanistic’ mismanagement involved at various corporate hierarchies. One of the preferred and cost-effective ways in which human errors are generally curtailed/eliminated in the respective context is by the use of machines that are rapidly graduating from the ‘conventionally dumb’ instruction-driven/job-specific devices to the ‘inherently smart’ AI-driven autonomous ‘electronic persons’/companions that are revolutionizing the workplace dynamics.

Consequently, it can be safely assumed that the drive for excellence is increasingly being driven by finding an optimum balance between the ‘humanistic’ and ‘mechanistic’ elements existing within a progressive organization.

Ironically, the uncertainties of gainful employment in ‘conventional’ professions is also necessitating the need for ‘delayed’ retirements as ‘real wages’ keep spiraling downwards in relation to inflationary pressures leading to the nagging struggles for maintaining reasonable living standards with enough savings for enabling a dignified existence as a senior citizen. Consequently,

Consequently, timely realization of the changing professional landscape due to disruptive innovation and the level of corresponding astute adaptability becomes the core determining factor in realizing the scale of career progression, career stagnation or career obsolescence for diligent professionals in the foreseeable future.

The key for astute professionals is to never starve a positive mindset with its ability to envision novel ways of adjusting to the dynamic demands of the digital world by failing to engage in an honest self-assessment of professional prowess while successfully addressing the ‘narrow’ compulsions of working in a particular organization. In this context, the following individual skill-tracking chart is being presented as a proactive tool to ensure that ‘irrelevancy’ never becomes a recurring nightmare for professionals seeking congruence to the new corporate norms. 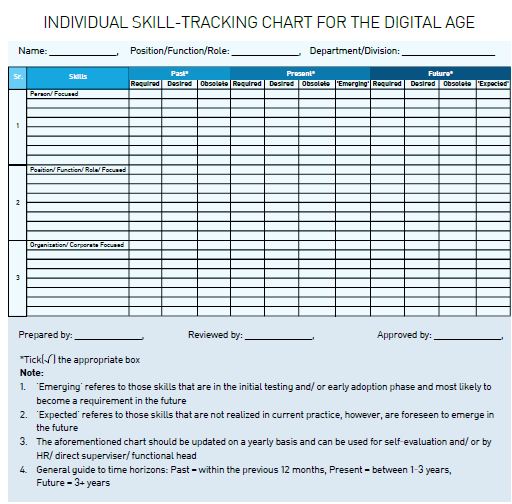 The aforementioned chart provides a lucid perspective of Learning and Development (L&D) imperatives within a temporal context and provides a panoramic view of the needs and expectations aligned with the career aspirations of a sagacious professional. It tethers the past, present and future skill sets in an easily discernible manner and can be used by the professional himself/herself, immediate supervisor, functional head and/or the HR/talent management function. It has the inherent flexibility of being utilized as a ‘historical’ and ‘current’ record/map of a professional’s growth and suitability for desired line of work without being tied to a particular organization. Following are some of the main exploratory questions that can be used in formulating the respective chart:

The aforementioned questions enable the skill-tracking chart user to prepare a fertile ground, sow an optimal mix of germinal skills and reap a productive harvest for prolonging his/her ‘usefulness’ as a ‘qualified’, ‘committed’ and ‘needed’ professional in the discerning purview of key decision-makers. It’s time we resolutely challenge the customarily used adage of ‘everyone is expendable’…

Murad Salman Mirza is an innovative thinker and an astute practitioner in areas within and associated with the fields of Organizational Development, Talent Management and Business Transformation
NEXT STORY: The ABC of the new age HR
Also Read: How payroll solutions drive employee financial wellness
Also Read: Creating a compelling culture for the workplace of the future

'Making a mark': What is Executive Presence and how can HR leaders master it?

Creating a compelling culture for the workplace of the future

69% of India's jobs threatened by automation