The study titled “The Future of Work: APAC Study”, surveyed office workers in the region to know more about the trends that the future of work holds.

The Adobe study has made some interesting revelations about the “future of work” for both India and whole APAC region.  Let’s take a look at them from both perspectives:

Today’s workforce depends majorly on Technology and the findings of the survey validate it. When employees based in major cities were asked that how does technology support them, this is how they responded:

Another key highlight was that “State of the art technology for my workstation” was the top factor creating ideal physical space at work.

The other two popular factors were:

According to the Indian office workers better efficiency, improved productivity and enhanced quality of work are key technology enablers.

More than 87 percent of office workers surveyed from India were based in major metropolitan cities, with a population of more than 2 million. While for Indian workforce 60 percent of the respondents chose availability of jobs as the major reason the percentage for APAC was 66 percent.

The other top two reasons were Infrastructure and Lifestyle Standards.

It’s the young millennial workers who are said to be driving the positive transformation across organizations. And the good news is that 91 percent respondents in India felt most confident about their organizations’ focus on fostering innovation.

What are the top ways through which these younger workers are driving change? 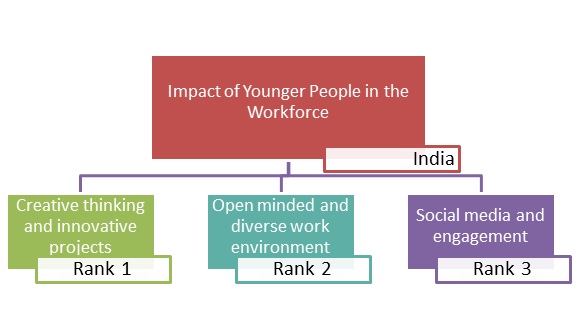 India respondents stated the following ways (in order of their rank):

Artificial Intelligence: A boon not a threat

Another interesting insight of the survey is the outlook of office workers towards Artificial intelligence and machine learning.

While anxious about the impact of these new technologies on their jobs, 95 percent of office workers in India are optimistic about using Artificial Intelligence to perform mundane tasks.

The survey asked the respondents if they were concerned about the impact of artificial intelligence and they had an interesting response.

“Home to the world’s youngest population, millennials comprise a significant proportion of the total workforce in India, and are driving transformational changes at workplaces across the country. These discerning new age workers are not only leading the innovation charter at companies, but most importantly, becoming the torchbearers of diversity and use of technology at work,” said Abdul Jaleel, Vice President, Employee Experience – India.

Drishti Pant is Manager - Content & Special Initiatives with People Matters. You can reach her at drishti.pant@gopeoplematters.com
NEXT STORY: 5 reasons why Running a marathon is good for your business
Also Read: Union Budget 2023: Focus on youth empowerment through skilling schemes
Also Read: Tech trends that will hold the edge in 2023

Humanizing work in the age of AI