Wheels were invented somewhere around 3,500 BC. And yet it wasn't until 1886 when the first automobile was created by Karl Benz.

The 2019 World Bank report called ‘The changing nature of work’ draws an interesting parallel between the growth of Ikea, the Swedish furniture retail giant that took 30 years to clock $42 billion after seven decades of its existence and the Chinese e-commerce giant Alibaba achieved annual sales of $700 billion within 15 years using digital technologies. The inference gauged from this reiterates the popular notion that technology is here to stay. The writing on the wall remains clear- Go Digital or Go Home!

Over the last 70-80 years, the jump from an industrial era into Industry 4.0 has digitalization at its core. The dawn of the third millennium sees the transition of leaders from not just ‘leading a digital workforce’ but as ‘pioneers leading into the future’. This change is more vital than the functioning of team members

So why is the transition of leaders important?

As we navigate through the VUCA (Volatility, uncertainty, complexity and ambiguity) world, transition of leaders becomes crucial to tackle unpredictability and challenges. Organizations today host a rich set (mix) of Gen X, Gen Y/millennial or Gen Z/Centennials working in conjunction (collaboration). We believe that the newer generation comes with the best creative minds. Their persistence allows them to try without fear, fail and restart all over again. The experimental and explorative mindset they bring to the organization needs to be opportunistically encouraged. One cannot name a single sector which hasn’t been positively influenced by digitalization.

An experimental mindset supports dealing with ambiguity with a readiness to adapt. These leaders motivate team members to challenge the status quo. Leaders who are proficient in adapting and deciphering complex problems in a digital workforce tend to create easier methods to derive logical conclusions. The key in leading this digital workforce lies in enabling them by constantly motivating, believing and trusting them as they achieve the desired goals//(as they work towards achieving digital goals.) Leaders will need to assume frontal leadership strategies to tackle multiple risks in the VUCA world as they simultaneously build a culture of trust in their teams allowing substantial room for failure.

Culture of trust engrains this new digitally led workforce to be empowering, encouraging and involved. The leadership approach can no longer be directional, but enable your team to be self-organized members to manage the day to day operations which boosts the organizations success.

Leaders need to set aside the ‘know it all’ attitude and retire top-down approach in this new era of leadership. The digital workforce will mandate autonomy, empowerment at all levels of hierarchy and entrust them with the freedom to work and make decisions. Learn, build and implement from all quarters. No single person is an all in one leader. Leadership comes in from all levels leading the way for success in the digital era. Leaders have even adopted 'reverse mentoring' to build on encouragement and more involvement of team members.

These skills can be developed along with digital skills, but will be rendered futile without having the right mindset. This mindset gap has proven to be a big challenge while leading a digital workforce. It completely depends upon innovative strategies used by leaders to bridge the gap between the generations.

Finally, digital-era leadership is incomplete without speed and agility to lead rapid progress and outperform the competition. Agility being a driving force to drive the company to success or failures. 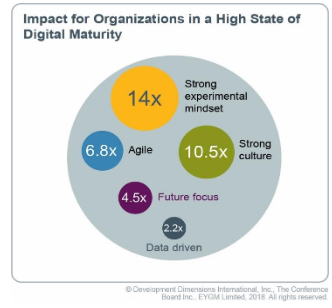 DDI's ‘Global Leadership Forecast’ reveals a considerable payoff for accelerated digital transformation. Building digital-era leadership capability requires a workplace where everyone learns daily. Digitally mature organizations (those farther along in their digital transformation) have ranked higher in work culture than their less-mature counterparts—by a factor of 10.5.

What distinguishes them is their likeliness to encourage and reward experimentation, be far more focused on future possibilities, not constrained by their past approached and take decisions that are heavily data driven. They are recorded to be nearly seven times more likely to lead with agility.

It's TIME – to remember "being digital" does not translate to "doing digital" nor is it how you lead people in a world driven by devices and technology. Rather it is leading with the freedom to leverage their creativity that will make the critical difference.

The digital leaders need to be equipped to be agile and adaptable to inspire, engage the experimental minds and focus in creating the right mindset. It's time for digital leaders to share their power through empowering the next generation to shape the future of a world builds around a strong culture of trust.

Amogh Deshmukh is the Managing Director at DDI India.
NEXT STORY: The making of a modern digital business
Also Read: What's my job, again?
Also Read: Oops, I failed! Lessons on facing failure from a corporate leader