Blog: The lessons from Demonetization 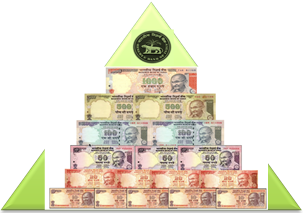 A governing body at the top, with the CXO level and rest of them downwards making up an organisation structure that one is so used to?

Does it imply, with demonetisation of currency notes being the most discussed about topic, the senior and middle management jobs are likely to vanish?  Pundits are forecasting a loss of about 20 crore jobs in India.  Will this be at the top levels?  The government is pushing hard, its national skill development programme, to enhance employment levels – will it turn out to be a myth?  Are jobs in future going to be like the demonetised `500 or `1000 denominations?

Demonetisation has shaken the country out of its ‘business-as-usual’ outlook, and in the process, there are some interesting lessons emerging.

Jobs are under threat

It seems imminent that if we continue working the way we are doing now, technology will make us redundant very soon.  It is believed that intelligent machines are likely to take away the jobs that are repetitive and predictable in nature.  This is applicable to the lower middle management and below levels.  However, what’s also changing is the way technology is influencing the environment.  Future appears unpredictable and complex to plan for.  Yet, the top management is expected to make predictions about business prospects.  This contradiction of sorts, will impact senior level jobs too, unless change in working style is adopted.

The government introduced operating level changes while announcing demonetisation of high level currency notes.  As law-abiding citizens, we all had to make adjustments, and do them quickly.  Put up with some inconveniences because the hope of a better future became the driving motive.  Likewise, uncertainty about future, on account of rapid changes taking place in the environment, is going to demand frequent adjustments that employees within an organisation will put up with.  When they believe that such decisions are made for the larger good, people will be willing to adapt.

Thus, top management will need to take decisions that may be tough but has a positive impact on the future.  They will have to accomplish positive outcomes in a reasonable period without stepping over compliance factors, and win over the support of its employees again and again.

Hope comes in the form of changed skills:

'1000' and '500' got demonetised but within quick time they were replaced with '2000' and a new  '500', respectively.  '2000' appeared from nowhere – the new emergence that is forcing the business to adapt to the change.  This is a transformational process – there will be resistance to change, objections raised about its relevance and a swimming-against-the-tide feeling. Welcome to the future!

`500, in its new form, is like a new skill acquired.  It is an enabler to making a transition into the new environment, which is likely to settle down as the ‘new-usual’.  When that happens, there’s hope for `100, `50, `20 and `10, all of which play a crucial role during the transition.

In a sense, hope for top management roles comes in the form of adaptability to change.  Willingness to shed current practices and stepping into the unknown with the hope to succeed, will be the demonstrable leadership quality than living on laurels of past achievements.

‘What got you here won’t get you there’ will become the mantra for change and transformation. There will be several instances of ‘chrysalis moment’ – chrysalis has to perish for the butterfly to emerge.

In a country of the size of India, literacy level, social habits, economic and cultural strata, etc. have been impediments for many well-meaning initiatives to become successful.  The forces of such factors have thwarted and frustrated ideas, leading to a belief that nothing will ever get implemented.  And then demonetisation happens!  It is criticised, opposed, stalled by competing political parties... everyone expresses discomfiture over the implementation, yet, the common man shows willingness to walk an extra mile to seek a change, literally.

When currency went into short supply, plastic and mobile wallets emerged from the sidelines.  All those who believed in only cash as the form of currency, switched over to online.  From the lowest levels to the most sophisticated society, people understood how to make and receive money using the mobile phone.  The adoption of mobile wallet surged, thus opening the country to adopt digital platform for many other things too.

Likewise, as organisations transform, jobs and roles will also get recreated or newly defined.  Possibility of contracting people when required than hiring against a forecast may emerge as the new way of engagement.  While some may say that jobs have vanished, many will experience a new way of engaging and staying relevant.  Stigmas associated with part-time working will vanish and, even at the highest level, contractual engagements, based on skills, may happen.

As the nation braces through an unprecedented cash-crunch situation on account of demonetisation, because they hope to see the future to be better, citizens are restrained in their expression of emotions.  They are willing to put up with hardships in the short run.

Employees too, will adapt, when the organisation demands most out of them, when there’s hope for a better future.  However, employees will want to see improvements in the system through a transparent and veritable process, open to public audit.  Benefits that accrue from the transformed process must be good-for-all.

It is possible that organisations will start defining mission and purpose that improves the quality of overall living, making social contributions as a core objective than merely achieving commercial profits.

Experiencing than owning will be the prime factor

As demonetisation is now leading the micro-banking revolution, a new habit of living is getting created –with less or no cash-in-hand, a family is able to meet their routine and regular demands.  This has a huge social impact too. The desire to experience life than earning-to-save for the rainy day; for children’s education or to get the girl child married, is likely to increase.  Micro-banking’s phenomenon is that cash can be made available to anyone at anytime, which actually makes cash less important in our lives.  Likewise, technology is connecting people with newer opportunities and newer experiences, which is making ‘experiencing life’ more important than seeking safety in employment, or ‘working-for-money’.   Freedom from the slavish attitude towards work will create space for newer ways of interactions amongst people, leading to newer opportunities for business.  Life doesn’t have to start at `10, 50 or 100 and rise to the level of `1000, through dint of hard work.  Working life could be more experiential.

Thus, reaching the '500' level is an opportunity to get re-skilled and reaching '1000' level is to get transformed, by willing to be adaptable.  Being open to re-orient and transform will become assets of managers, and abilities to shoulder responsibilities during trying times will become the traits of employees at the entry level.  Relevance will become more important than past work experience and the zest to experience something new will be the driver than mere title and compensation.  It's time to change, as doing today what we did yesterday, will only makes us feel like a `1000 rupee note!  The country is working on ‘change’, so will the management teams of the future

Dr. Y Shekar leads the Centre for Digital Enterprise (CDE) at IIM Udaipur. He earlier served the IT industry in India for over three decades.
NEXT STORY: Why is it important to get past mistakes at work?
Also Read: Holiday office party canceled? Try these 8 social distancing alternatives
Also Read: My son’s day-out – I am failing!