Read on to highlight some of the significant movements which took place from July 2020 to September 2020.

Satish Kumar- Accor announces the appointment of Satish Kumar as Senior Director Talent & Culture, India & South Asia. He succeeded Ashwin Shirali as he departed for his retirement. In the past, Ashwin has immensely contributed to the growth of the organization. During his tenure, he successfully spearheaded many pathbreaking employee and CSR campaigns which has helped the company nurture its talent.

With more than 20 years of experience in talent development, Satish in his new role will handle India hotel operations management teams. He will be responsible for driving a team of 9500 employees in 50 hotels.

Swaminathan Subramanian- Power transmission firm Sterlite Power has appointed Swaminathan Subramanian as the group CHRO effective. In his new role, he is leading the human resources function as the group CHRO and will report to Pratik Agarwal, Managing Director of Sterlite Power. Prior to this, Swaminathan was working as President and Chief People Officer with Reliance Capital Ltd., wherein he worked from December 2017 to June 2020.

Subir Sinha- NetCom Learning has named Subir Sinha as its new Director, Human Resources. Subir will head the HR function for the organization based out of India and will be responsible for ramping up operations in India and the US. Subir brings with him around 30 years in the HR function, having worked with an array of organizations such as the Creative Group, Arvind, Reliance Retail, ITC – Agrotech, and Reliance Communications.

Jasneet will work closely with the leadership team to ensure the rapid growth of the company through strategic talent management and dissemination of the company’s core values and culture across the organization.

Kameshwari Rao- Publicis Sapient announced the appointment of Kameshwari Rao as Global Chief People Officer.  Rao is entering her new role rich with experience, having served in multiple People Success leadership roles prior to this position. As part of the company’s global talent leadership team, she has been responsible for providing strategic leadership for its people agenda and building Publicis Sapient as an employer of choice.

Zoheab Rehaman- To expand its pool of talent, Pocket52 has on-boarded talent Management veteran, Zoheab Rehaman as its Chief of Staff and has previously worked closely with Cisco, Mu Sigma, and multiple high-growth start-ups.  Zoheab brings over ten years of experience in talent management, talent acquisition, and HR. He has continually showcased his skills and abilities in various multinational companies and has a proven track record of scaling multiple start-ups from their inception to maturity. different levels in addition to Cisco and Mu Sigma.

Arvind Krishna, CEO, IBM announced major leadership changes in the company. Diane Gherson, who has been IBM’s Senior Vice President of Human Resources for the past seven years, has decided to retire.

Nickle LaMoreaux succeeds Diane as the Senior Vice President of Human Resources and Chief Human Resources Officer. Currently responsible for HR in Cloud and Cognitive Software, Nickle is a seasoned HR leader who has a deep understanding of our business and the needs of our clients. Nickle has held a variety of HR leadership roles around the world and has worked on many large transformational projects while at IBM, such as the acquisition of Red Hat. 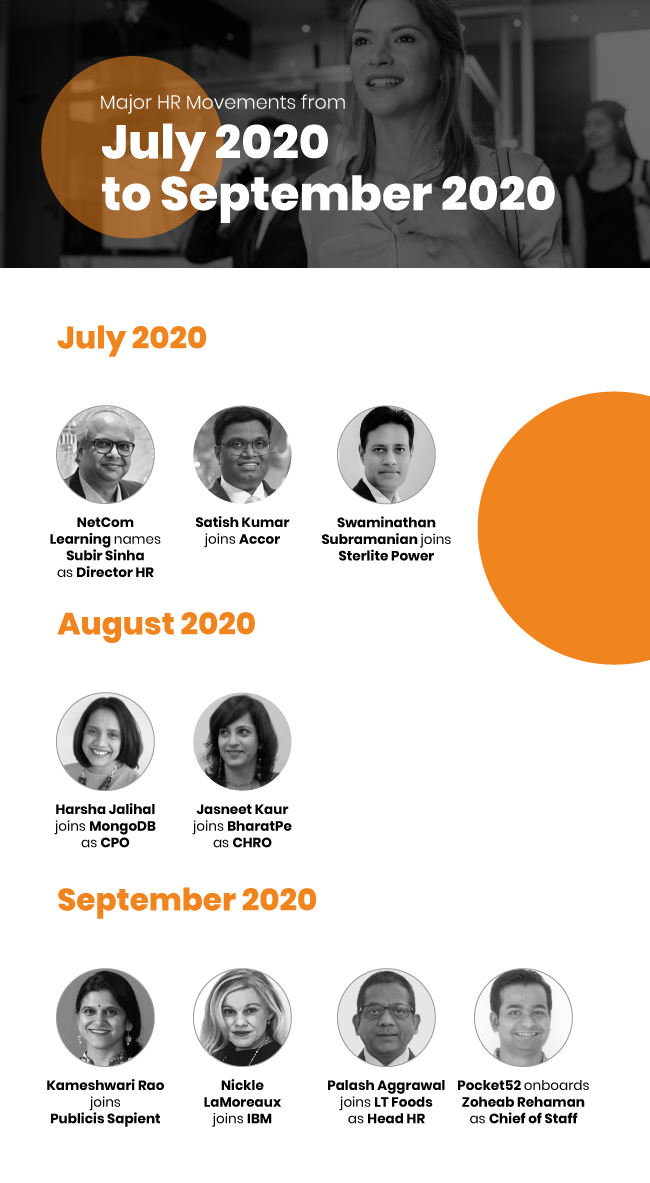 Former Associate-Editor, People Matters. You can contact him at +918010998491
NEXT STORY: People Matters BeNext Work-from-home certification: 5 reasons you can't afford to miss it

Simplilearn onboards ex-CFO of Flipkart as its CFO