That’s the short message that India Inc. is driving home as per Aon’s latest salary increase survey that interviewed more than 1000 companies. The industry gave an average salary increase of 9.5% during 2018 compared to 9.3% during 2017. Furthermore, as the Indian economy shows signs of recovery and a favorable outlook backed by improved business and economic outlook, high domestic demand and low inflation, the projections for 2019 look slightly better at 9.7%. But for high performers and critical talent, the increments could be 1.8-1.9 times, solidifying further the pay for performance principle that India Inc. has embraced.

It is, however, interesting to note that while the overall average increments seem to be moving in a positive direction, salary increases have remained broadly stable over the last three years. A trend that has quietly but clearly emerged is the coming of age of India’s corporates when it comes to managing compensation budgets. If personified through the below lifeline, the stages of youth, stability, and maturity are very clearly visible for India Inc. in the trend line

Over the years, the ratio of salary increases to GDP growth rates in India has started to show signs of maturity and is merging with the global developed economies line (1.2X – 1.4X) while other emerging economies have a relatively higher salary increase to GDP ratio of 1.6X to 1.8X.

Interestingly, despite the maturing of salary increase numbers, India continues to enjoy one of the highest inflation-adjusted salary increases in APAC. The real wage increase in India has increased from 2.5% in 2013 to 4.4% in 2018. This is also helping organizations manage/reduce overall budgets as there is less pressure on the disposable income of employees.

The details are in the differentiation

This differential between an average performer and top performers has gone up over the years. There has also been a significant and noticeable impact on the bell curve distribution as companies are not shying away from identifying employees on both sides of the performance spectrum. This is true across both manufacturing and services sector where talent segmentation across performance is almost identical.

A decadal analysis of bell curve distribution, as well as pay differential, shows that the number of ‘Top Raters’ have reduced while at the same time, there is a 1.7 times increase in the ‘Bottom Raters’. The pay for the performance multiplier that has consistently moved north, ensuring there is a higher differentiation for performance (1.3X to 1.9X in 2018).

On the other hand, key talent of the organization which includes high performers, high potentials and employees with business-critical skills are remunerated approximately 1.8 times more than employees who fall in the ‘Meets Expectation’ category with an increment percentage of 14.6%.

The sectors continue to converge

When we double click on overall salary increase numbers, the story that unfolds across sectors is similar. Sectors projecting a double-digit increment have come down over the years with only five sectors projecting a double-digit increment for 2019. These include sectors such as Consumer Internet Companies, Professional Services, Life Sciences, Automotive and Consumer Products. 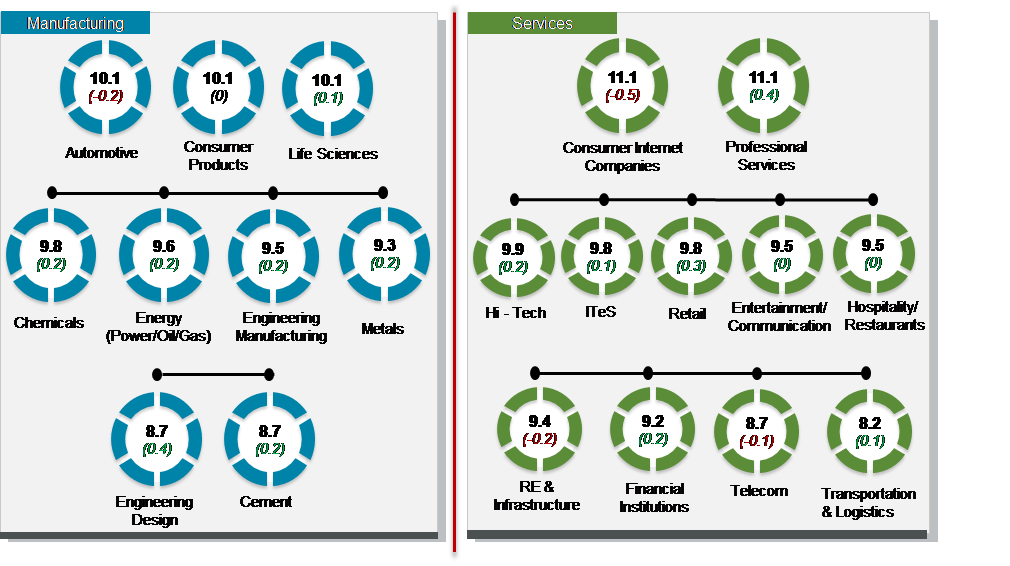 From 2001 to 2007, while the services sector observed higher salary increases (given the boom in sectors like IT/ITES, banking, telecom, retail etc.), post 2008-09, the manufacturing sector had gained the lead and has consistently rewarded higher increments given high industrial growth, the insulation the sector enjoys from global economies and high domestic consumption pattern. 2016 onwards, the divide has been smaller and the margin between the two sectors has reduced considerably to under 1 percent on an average.

Further, pay increase budgets across both sectors is increasingly tending towards the overall average. Over the past 5 years, we have observed faster moderation of pay increases especially in sectors like consumer internet companies and life sciences. Industries are now more closely knit in a group.

The overall attrition has come down from 18.5% in 2013 to 15.8% in 2018 indicating a blunting of the edge of the ‘push’ forces at work. At the same time, the ‘pull’ forces have abated as well with fewer industries sucking out talent from the market.

In order to manage overall pay budgets, companies are moving away from mass hiring and focusing on hiring only for key skills which will determine the success of the business over the longer term. As digitization becomes the new normal, companies are investing in these niche skills to stay relevant in the changing business scenario. Some of the critical skills being highlighted by companies include digital technology, big data analytics, artificial intelligence etc. As a result, companies are willing to pay a premium in the range of 10% to 20% on these skills. 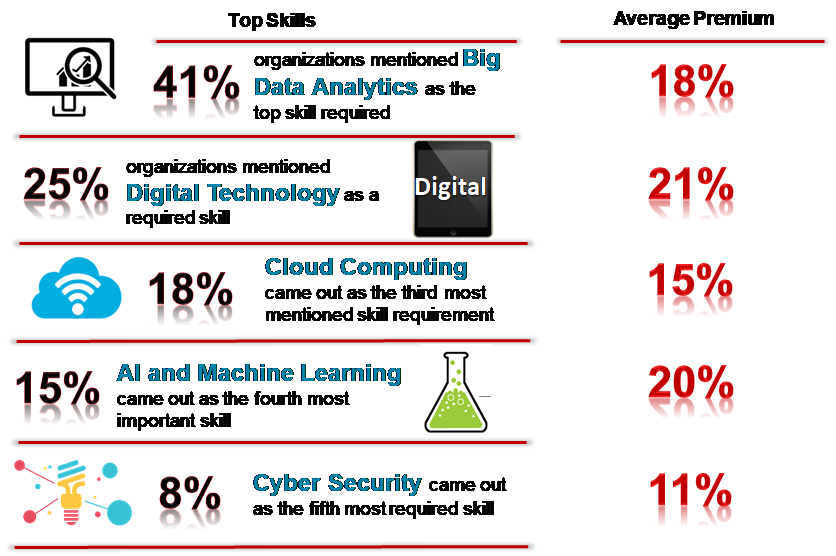 Are we missing any dark spots or is it mostly bright?

The salary increase projections for 2019 are stable yet favorable at 9.7%. However, an interesting twist to the tale is that 2019 is going to an election year. If previous election years are anything to go by, the actual increment for 2019 may look a bit different from projections. Considering the most recent elections of 2014-18, there was an improvement by around 13% in absolute Sensex returns in 1 year after the elections. Similarly, in the two elections prior to this, there was an improvement in Sensex performance between 20% to 30% in the year following the year of election. We have further seen a strong correlation between market performance and increments over the years.  The actual increment during 2014 saw a positive variance of 0.4% while actual increments in the year 2004 were 1.8% higher than the projections for that year. We have excluded the actual salary increase for 2009 as the increments were adversely impacted on account of the overall economic downturn. Based on this, there is a fair possibility that actual increment numbers for 2019 may be relatively higher than the projections.

From our perspective, we recommend organizations to carefully consider the cost of living while planning pay increases for junior and entry-level, focus more on incentive compensation to manage cost, and ensure top / critical talent receives a disproportionate share of the pie. While we can wait in anticipation for the good news to arrive, it will make sense to focus on the fundamentals that will only enhance the paradigm of performance and pay, that is here to stay.

Roopank Chaudhary is the Partner at Aon India.
NEXT STORY: How can organizations recognize and redress sexual harassment at workplace
Also Read: Davos 2023: WEF experts urge business-government partnership to tackle living wage crisis with innovative policies
Also Read: Performance Review: How to ace your chances of getting that pay raise

Why are professionals in India looking for new jobs amid economic uncertainty?