According to a report released by Willis Towers Watson (WTW), salaries in India are projected to rise 10% in 2017. The increase is the same as the actual increase in 2016. The 2016 Salary Budget Planning (Q3) Report released by the advisory, broking and solutions company shows interesting trends.

What is the report?

The 2016 Asia Pacific Salary Budget Planning Report is a bi-annual survey compiled by Willis Towers Watson’s Data Services Practice. The survey, timed to coincide with companies’ compensation planning for 2017, looks at a range of industry sectors and job grades from factory shop floor to executive suite, and focuses on salary movement and review practices.

The survey was conducted in July 2016. Approximately 4,000 responses were received from companies across 22 markets in Asia Pacific. The industries covered include technology, financial services, pharmaceutical and health sciences, chemical, energy and natural resources, media, retail, construction and engineering, transportation and consumer goods.

How much will salaries increase in 2017?

Salaries of Indian employees are projected to grow by 10% in 2017. In 2016 the salaries were expected to rise at 10.8%, but actually rose 10%; the second time below projected increase since 2015. If the trend continues, there is a good chance that the actual rise in salary for Indian employees plummets to single digit – the first time since 2011. Additionally, the report states that after adjusting the average inflation rate of 5.7%, the projected increase in real terms for 2017 settles to 4.3%, down 0.1% from 4.4% in 2016. On the bright side however, India was leading the salary growth among developed and key emerging markets.

Here is how others fared in comparison to India: 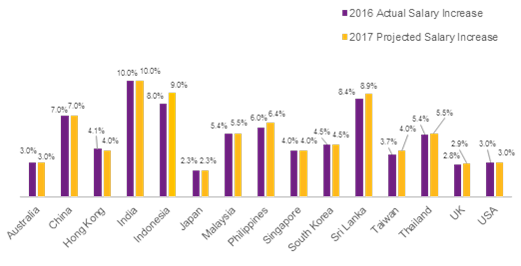 Sambhav Rakyan, Data Services Practice leader, Asia Pacific at WTW says, “The data clearly shows a greater emphasis on rewarding high performers rather than across-the-board increases for all workers. Without such differentiation, companies will face pressure in attracting and retaining talent, especially for in-demand areas. Employers have to think beyond inflation-linking and look at more nuanced factors such as affordability, growth expectations, both employee and company performance, and specific talent and skills needs... It’s important to prioritise the best performers and also to review how employees are rewarded with other incentives, such as more attractive benefits.”

The uncertainty in the global economy continues to give lacklustre projections and results. With 2016 being the year of disruptions, financially and politically, one can safely assume that the dust is not going to settle anytime soon. Additionally, the economics and finances of India as will need some time to pick up speed, post the current and recent doubts are clarified. Nonetheless, India continues to lead global recovery, and maintain impressive growth despite troubling a troubling and challenging international scenario. Salaries of Indian employees will certainly grow the most next year, but going forward, the challenge will increasingly become not only to take the lead, but maintain it. To build true value, the focus needs to come back to human capital formation, and opportune employment opportunities.

Why are professionals in India looking for new jobs amid economic uncertainty?