Since startups have this blur of activities, it is all the more reason for them to consciouslycreate time and space to buildcommitted teams- Mario Moussa

Because of the scorching pace, a startup often feels like the emergency room in a hospital where every patient who is brought in needs urgent care

The founder put his feet up on the office table, adjusted his black shirt and blue jeans and wondered if he was getting old. Akshay was already 22, which is a good three years older than what Mark Zuckerberg was when he started Facebook. That is why he has started to model himself on Steve Jobs instead. But Steve Jobs was already on to Apple II at age 21. Akshay and his room-mate from college had taken the company from their rented one room dig in Mumbai to this office space in Bangalore’s prominent tech park. They had almost a hundred employees. Wait… that was the problem. Yes, they had a hundred employees – not founders.

Akshay and the co-founder would interview each and every person when they made their first fifty hires. Then people complained about lack of empowerment. Then Akshay let team leaders hire their own teams. The first fifty employees were different from the rest. The more recent hires seemed to have joined only for the money. The energy was missing. That electric atmosphere of the early days when they worked for seven days in a row before they pitched to the first investor. Everyone worked at it. When someone collapsed on the floor from lack of sleep, Akshay would make tea for them to wake them up. When they got their first round of funds, they celebrated by going for a movie – every one of them. 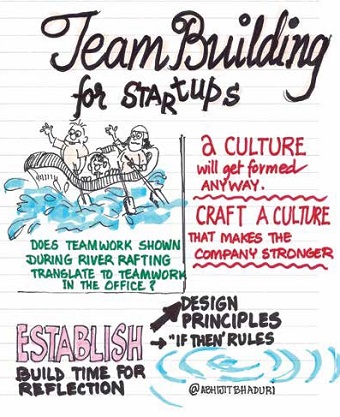 While everyone still worked hard, the spark was missing. People expected to be rewarded for every little thing they did. Akshay had once snapped at someone during their All Hands Meet, “You have become like the proverbial slot machine. I need to keep feeding you with coins if I have to see some action.” The next day five employees left.

Do startups need to go for an “offsite” like other established companies when they want to build teams? Does going river rafting as a team translate to better teamwork when everyone is back in the office?

Mario Moussa, the author of ‘Committed Teams’ believes that since the startups have this blur of activities, it is all the more reason for them to consciously create time and space to build committed teams.

Because of the scorching pace, a startup often feels like the emergency room in a hospital where every patient who is brought in needs urgent care. The doctors assign degrees of urgency to the patient and then decide the order in which they will attend. So someone with a broken wrist may get lower priority than someone who walks in with a gunshot wound.

Startups will routinely have a CFO, a CTO, even someone to handle marketing. But most limit the role of HR to hiring and payroll. Having a mentor work with the leadership team and the teams in the organization may provide this opportunity. The mentor’s role is that of Chief Culture Shaper and crafting a cohesive and high commitment culture.

Here are three things the startups can do to keep their teams cohesive:

2. Set a few “if-then” rules: If there is a product breakdown, the entire leadership will take accountability for the failure – not any individual. That was the norm at a food technology startup. Failure was always owned collectively. That made people take accountability.

3. Build a reflection process during each major transition: People learn from their experience when they reflect. The same holds true for a team. Being able to pause and ask what could they have done better; what assumptions of theirs would they revisit are good questions for the team to ask. The reflection process is also a time to celebrate the wins of the team.

Whether you like it or not, culture will start forming in every group. Biz Stone, the co-founder of Twitter says, “If you pay attention, you can craft something that will make the company stronger.” A startup may need team building through the tasks and processes and not through freebies.

Abhijit Bhaduri is columnist, author & coach to senior leaders. He is the author of two bestsellers: The Digital Tsunami & Don't Hire the Best
NEXT STORY: What the State-of-art inclusion in India Inc. looks like
Also Read: Intention must be matched by action and action backed by accountability: Bank of New York Mellon’s Pallavi Shome
Also Read: Meesho announces 11-day Reset & Recharge break for employees

Culture & advancement are the key motivators for employees: Narayan Gangadhar