I think it’s more than suitable to thank job seekers for applying, and let them know that they’re not qualified. You should also clarify why they aren’t qualified

The recruiter accountability spectrum pays emotional dividends down the road

Everybody is saying that 2016 is the year of the candidate experience. It means recruiters will treat people like human beings and will give feedback on resumes and after interviews.

That’s a lie, of course.

Giving feedback is hard. Conflict is difficult. Even people who say they don’t mind having uncomfortable conversations are liars. Most people would rather just let things die on the vine than have an awkward or disappointing discussion.

I recently stumbled upon the Relationship Accountability Spectrum, which was created by Esther Perel. She’s a noted expert on relationships and intimacy. As you’ll see below, she’s outlined the unhealthy ways in which people avoid conflict when a relationship ends. 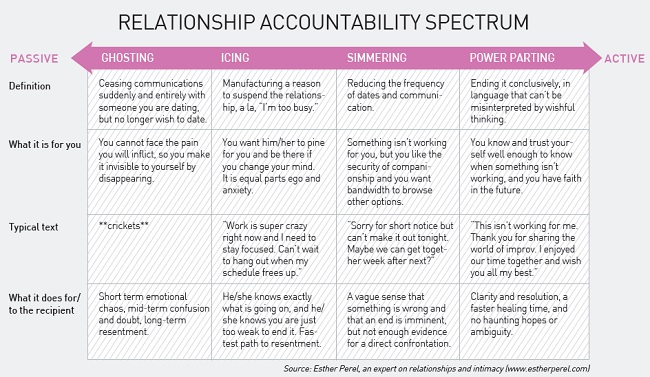 The best and most succinct way to end a relationship that’s going nowhere is through the “Power Parting,” but that’s difficult for many people and takes courage. But emotional ambiguity is killing many Americans out there, and I think it’s killing a lot of job seekers, too.

When a recruiter ghosts on a job seeker, the recruiter exercises a scary amount of power and creates chaos and turbulence in a job seeker’s life. It’s unfair and, honestly, a little unethical. Your job as a recruiter is to keep your applicants and candidates informed. When you ghost, you create a ripple of cynicism and confusion in the job market. It’s unfair to everybody.

When a recruiter ices a candidate and is vague about what’s going on behind the scenes, that’s equally cruel. Nobody’s calling for radical transparency, but if you know something, say something. Why would you make somebody’s job search so stressful?

When you engage in simmering, you treat a candidate like a commodity instead of a human being. Don’t lead job seekers along only to disappoint them in the end. If there might be an opportunity in the future but you’re not sure, it’s your job as a recruiter to get sure.

Perel offers the “Power Parting” model to achieve clarity and move forward in relationships, and I think that works with candidates, too. She suggests you use the following prompts for a final conversation.

I think it’s more than suitable to thank job seekers for applying, and let them know that they’re not qualified. I think you should clarify why they aren’t qualified, too. (That’s tough to do if it’s amorphous and vague. It’s your job as recruiters to make sure it’s not questionable or problematic, by the way.) And you should let job seekers know how they can contact you in the future.

This article was first published on Laurie Ruettimann's blog

Future-ready strategies to secure a robust and sustainable talent pipeline