Blog: A model to predict and improve industrial relations climate

Having been in the industry for the last 30 years or more and having managed major industrial unrests or advised major corporates in resolving such disputes which includes strikes, lockouts, closures, wage settlements, etc, I wanted to propose a Conceptual Model for assessing the Industrial Relations Climate in an Indian setting, which while being simple is also solution-oriented. The reason to have a proactive assessment is that it will help resolve an issue before it snowballs into a major turmoil.

In the Western literature, Industrial Relations (IR) Climate is defined as the degree to which relations between management and employees are seen by participants as mutually trusting, respectful and co-operative (Hammer, Currall, and Stern 1991).

I attempted a search in the Indian Literature for available models but there were none. However, I noted an interesting study which said that an individual's perception of the psychological climate in the organization has a significant positive impact on his willingness to engage in tasks well beyond his contractual tasks which in Organizational Behaviour parlance is referred to as Organizational Citizenship Behavior (OCB).

Therefore, I felt a practical tool will be helpful, especially to the multinationals that set up factories on our shores, to proactively understand their IR climate.

I propose a Conceptual Model for assessing the Industrial Relations Climate in an Indian setting which is solution-oriented. The proactive assessment can help resolve an issue before it snowballs into a major turmoil

Therefore for our analysis, I have developed a simple two way matrix based on two factors:

1. The vulnerability of the organization

I had felt that vulnerability determines the IR climate. About thirty years ago, I was working as a Personnel Officer at a factory manufacturing a type of Resins. I found a pattern; disputes will take place only during the half year end or year end, when we will be trying hard to make up for the customer demand. There will be a pin drop silence during December-January months when there will be a maintenance shut down. The Union will take up a sensitive issue only when we were in a vulnerable position to arm-twist and pressurize us.  This was a great learning to me at that time.

But that was during the pre-liberalization era and also it was a chemical process industry so any work stoppage can damage the product. So our vulnerability was high during peak market period and added to that was the process vulnerability which means the entire batch could get spoilt if they go on strike and in those days a batch would cost around five hundred thousand rupees which was quite a lot of money at that point of time. Often we were forced to agree on an issue during those times as customer supplies will get hit.

Later, during the post-liberalization era, I worked in an auto component major being the sole supplier of a product to all the major auto industries. Here again, I had to handle a major strike. I realized that work stoppage could bring to a grinding halt the entire auto majors in the country. This was our weak point so the Union were forcing our hand to relent to their demands.

I had to declare a partial lockout of the striking workmen after I convinced my MD to my idea and got the work done with temporary workforce. They finally relented when they realized that we had steered through our vulnerability. They came forward for an amicable solution.

But, thereafter, I realized that we cannot change our vulnerability but can change the way we deal with the union.

So I started a proactive grievance resolution method which I called ‘Healing’ to bridge the trust deficit which was present. It took time as the Union initially had doubts about our sincerity. Later, we moved on from the past. I devised another approach taking a leaf from the political sphere; agreeing to disagree on certain issues and not allowing those to strain the relationship. This paved the way for building a favorable industrial relation climate, greatly improving our collaboration while our vulnerability stayed stuck at the same place. But we had no apprehensions that time and the Union also increased productivity.

Apart from this having handled major industrial turmoil, I realized “collaboration“ was the key. I found that in a major manufacturer wherein ten years ago when they started their plant there was a strike that lasted for three months. I was engaged by that Company to find a resolution. It took several days but we were able to find a solution. Thereafter, we started a “Collaborative Process” with the same union and there had been peace. Of course, we do have our differences but we are serious in our Collaborative Process, so we find solutions however, difficult the issue is.

Therefore, I developed this model:

1. The vulnerability of the organization

a. I have classified the type of vulnerability based on the following:

i. Process industry where the shelf life is short-food, milk, etc

iii. Industries wherein their product can wait to be marketed.

a) I have identified the following criteria to identify the type of Collaboration which is as follows:

I give credit to Collaboration based on the scores they get for the following:

I have assigned scores for these criteria to measure the overall score for Collaboration.

Now based on the two –way matrix I map the Industrial Relations Climate which will highlight 4 types of Climate which is self-explanatory: 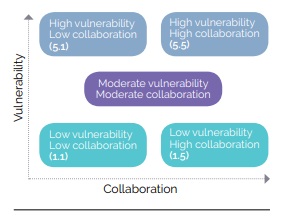 Now I recommend to the Company that it is with them to move the Collaboration Score from low to high.

I have helped corporates using this matrix to predict the IR Climate and take steps to improve.

HR Management in a Post-Pandemic World: How Processes and Technology Will Evolve