News: The cities where it's easiest to deploy remote workers

It's a hot topic these days - which cities are the best for remote work? Earlier this year one study by rental platform Nestpick attempted to rank cities around the world, using cost, freedom, and livability. Now a new study by global HR platform WorkMotion adds a new aspect to the evaluation: employment compliance, or the ease with which companies can deploy remote workers in a city while complying with employment laws.

WorkMotion's study assesses remote working compliance based on factors such as rule of law, regulatory quality and government efficiency, the legal requirements employers need to follow, and the state of visa legislation for remote workers. The idea is that a more straightforward compliance environment and a flexible legal system make it easier to employ remote workers.

On the other hand, the cities that scored highest on ease of compliance tended to have matching high scores on legal requirements, with Dublin, Helsinki, and Copenhagen topping the list - underscoring that good quality government and regulation improves everything else compliance-related.

The study also assessed cities on how pricey housing is, and how widely available it is - a major consideration in many parts of the world today, where property markets have inflated for various reasons and both citizens and policymakers express fears that housing prices are rising out of the reach of average income-earners. General living costs, income tax, and social security contributions factored into the cost of living as well.

Unsurprisingly, highly developed cities that otherwise scored well in other areas tended to do very poorly in this respect, with the usual culprits like San Francisco, Hong Kong, and Singapore right at the bottom for housing costs. Even the overall top-ranked cities scored noticeably lower in this area than they did for other categories.

Civic infrastructure was defined as a mix of political stability, safety, and equality for minorities, along with access to good quality healthcare and public education. Ease of compliance tended to correlate strongly with this.

And livability was defined by general happiness of the city's inhabitants, cultural attractions, and mobility.

Australian cities make up 2 out of the top 3 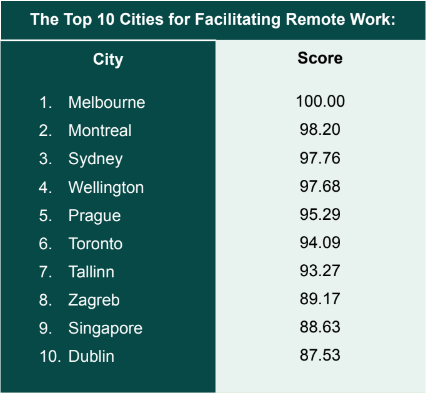 Australian and Canadian cities top the list, with Melbourne, Montreal, and Sydney reckoned the most accessible across the board for companies wanting to deploy remote workers.

Carsten Lebtig, co-founder and Managing Director of WorkMotion, said that legislation tends to play an outsize role in making cities attractive to remote workers and the companies deploying them. Remote working visas, he noted, weigh particularly heavy in the balance.

"Making it easier for employees to work remotely in their city by offering this demographic specific visas means the relocation process becomes far smoother," he explained. While the study found only 11 cities offering a specific visa for remote workers - dubbed a 'digital nomad visa' - he believes this will become more prevalent in the future.

"We expect to see this change over the next few years, as remote working becomes more common and cities begin to recognise the benefits it can bring," he said.

Mint is working as a Senior Editor with People Matters. You can reach her at mint.kang@gopeoplematters.com
NEXT STORY: Cornerstone takes on skills development market, launches new all-in-one platform
Also Read: Pfizer India offers 12-week paternity leave policy for its employees
Also Read: They might have 'quiet quit', but they're also happier with their jobs: Survey

They might have 'quiet quit', but they're also happier with their jobs: Survey