News: Over 50% of Indian students will not have skills for 21st century jobs: UNICEF

As per findings by the United Nations Children’s Fund ( UNICEF), more than 50% of Indian students and students from other South East Asian nations do not have the required skills for getting a job.

UNICEF head Henrietta H Fore has declared that the gap between skills and demand in the job market is increasing, and South Asian students are at a receiving end.

Henrietta stated, “Every day, nearly 100,000 young South Asians-a large sports stadium of young people- enter the labour market, almost half of them are not on track to find 21st century jobs. South Asia is at a critical juncture, with a limited window during which it can reap significant demographic dividends from its talented and capable youth.”

As per UNICEF report: Special edition of GBC-Education’s 2030 Skills Scorecard, only 19% of Indian students right now are on track to reach the learning benchmark, as prescribed by UNICEF. And by 2030, only 47% of the students will be able to reach that benchmark.

Meanwhile neighboring Sri Lanka, with 61% score has the best benchmarks, whereas the Maldives with 16% is the worst. 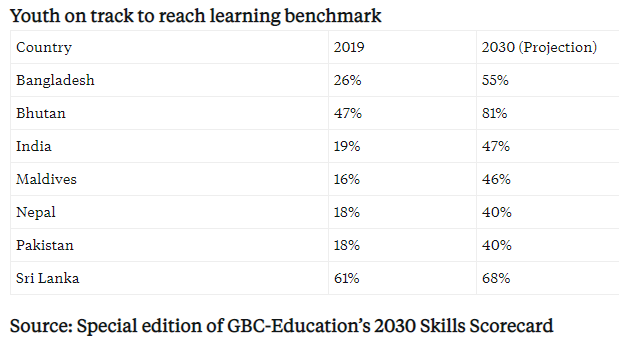 Henrietta added that only employment and jobs can lift the poor countries out of misery, and if something is not done right now, then it will be an emergency in the days to come.

She said, “Get it right, and millions could be lifted out of poverty. Fail to do so, and economic growth will falter, youth despair will rise, and further talent will be lost to other regions.”

The warning from UNICEF comes at a time when organizations the world over are focusing on skilling and reskilling to make employees future-ready. Given that India is struggling on the employment front as well with its unemployment rate hovering around 8.45% and the ongoing slowdown in sectors like auto and telecom, skilling students for the 21st century jobs gain even further importance to save them from joblessness.

Shweta is working as an Associate Editor with People Matters. You can reach out to her at shweta.modgil@gopeoplematters.com
NEXT STORY: Cognizant looking to ramp up employee count by hiring 23,000 students in 2020

SpringPeople partners with SAP Education to upskill IT workforce