Article: What does it mean to live in Perpetual Beta?

What would you do if you were the CEO of a rapidly growing business worth $30 billion? The business operates in every country in the world except Iran, Syria, Sudan, Crimea and North Korea. Every other celebrity is among the 100 million custom- ers who gush about the service and that leads to more business and growth. And yes, you are only 35 and one of the most powerful CEOs in the Silicon Valley. What is next for someone who has done it all?

If you are Brian Chesky, CEO of Airbnb, you will decide to disrupt yourself. “If we don’t grow past what we originally invented, what leads to your success leads to your death.” He has cut himself off from his existing business and is building his next gig. He is going to focus on scaling

up Airbnb Trips that offers travelers a series of experiences. The whole business is designed around creating an experience that allows a person to step into someone else’s shoes. Isn’t that what psychologists would call empathy?

If we don’t grow past what we originally invented, what leads to your success leads to your death - Brian Chesky, CEO & Co-founder, Airbnb

In a world when most rational and logic driven businesses from manufacturing to accounting are looking to replace human beings with algorithms, businesses that leverage the most human of our emotions – empathy, will blossom. It is hard to replicate by a competitor. It needs employees who are deeply engaged in creating experiences that are memorable for its customers. 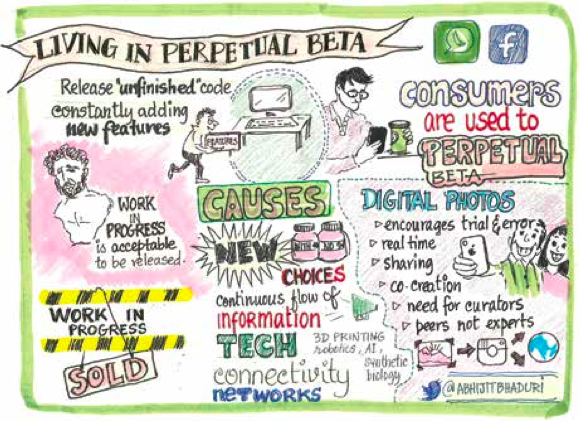 The existing Airbnb business is facing its own challenges. In some cities, they are getting peppered by lawsuits. In some others, the neighbors are turning violent. The tax officials are trying to clamp the screws on the homeowners. Schools are protesting that having an Airbnb in the neighborhood is a bad influence. The current business is growing at breathtaking speed. In 2013, Airbnb hosts lodged nine million guests, a number that could soar to nearly half a billion in 2025.

Most CEOs would be happy to focus on their golf game having built in ten years, If we don’t grow past what we originally invented, what leads to your success leads to your death - Brian Chesky, CEO & Co-founder, Airbnb a brilliant business model that disrupted every hotel in the world. They handle a million listings and a $30 billion business with 2500 employees.

But Chesky is working on the next dream. He is not happy to live off the thriving business. He is dreaming of the next big thing. He has a perpetual beta mindset like his hero Jeff Bezos who is busy build- ing the world’s largest online store. Bezos believes that if you want to do something, you have to stop being afraid of being criticized. Jeff Bezos is using part of his $67bn fortune to create Blue Origin. He is building a spaceship that will carry people to Mars. The sky is not the limit!

Chesky pulled out six employees and rented a building next door to the sprawl- ing Airbnb office. And has gone on to disrupt himself — this is the mindset of people who live in perpetual beta. Before the dust settles down in one project that is growing at blinding speed, they are prototyping their next dream. They disrupt themselves and are not afraid of failure. Success is for people who are not afraid to fail.

Abhijit Bhaduri is columnist, author & coach to senior leaders. He is the author of two bestsellers: The Digital Tsunami & Don't Hire the Best
NEXT STORY: In conversation with the father of modern HR, Dave Ulrich
Also Read: JFrog appoints former Puppet CEO Yvonne Wassenaar to the board of directors
Also Read: upGrad names Srikanth Iyengar as CEO, workforce development for North America, Europe