Special Agent Holden Ford is having another one of his many argumentative episodes with Chief Shepard, the Quantico Unit Chief of the Federal Bureau of Investigation. This time, the argument is for allowing him to continue his work of interviewing sequence killers (the term serial killer was coined later by Ford and his partners, Bill Tench and Dr. Wendy Carr coin later) of the ilk of Edmund Kemper, Jerome Henry Brudos, and Richard Speck.

Holden Ford is a character in Netflix’s crime thriller Mindhunters, and is inspired from FBI’s own John E. Douglas – the pioneer in criminal profiling. The criminal psychologist has been the inspiration behind Jack Crawford, a major character in the books Silence of the Lambs, and Red Dragon, Criminal Minds’ Jason Gideon, and ofcourse Holden Ford of Mindhunters.

After completing watching the first season of Mindhunters, watching Holden Ford’s antics, followed by being left in shock after the gruesome testimonies of some of the most violent criminals of that era – I was left wondering – could a Ford-like approach be replicated in Human Resources? Not to suggest there are violent criminals in your workforce, but his approach to behavioral science. For those who haven’t seen the show – Holden uses very uncanny interviewing techniques and conversation styles, stooping to the trash talking levels of the violent offenders and making them feel comfortable to open up and share their own feelings. You could even label this approach as an extension of conversing with empathy.

A behavioral science unit, in every organization, may prove to be an extremely useful ally of the Human Resources Department

“How can we get ahead of crazy, if we don’t know how crazy thinks”…

…says Holden Ford to Unit Chief Shepard when the latter is dubious of the Special Agent’s work and wants him to stick to his task of teaching criminal psychology to police officers, and not go out of his way and interview serial killers.

Bill Tench: “You know he (Holden) has a point.” And he indeed does. In-depth interviews with serial killers help them theorize criminal profiling, and master its application. They use it to help state police in different regions of the country – places they go to instruct local police.

What if something similar could happen in Human Resources? Understanding and mastering employee profiling – of different categories and classifications; so that customized programs could be made for each classification. Its application could be extended to highly disengaged employees; employees with a good aptitude yet happen to struggle with their performance; even employees who engage in misdemeanors of data theft or sexual harassment. One may argue that a similar work is done by academicians in the field of organizational psychology or by Human Resources with their organization-wide surveys. What lacks in both these approaches is: 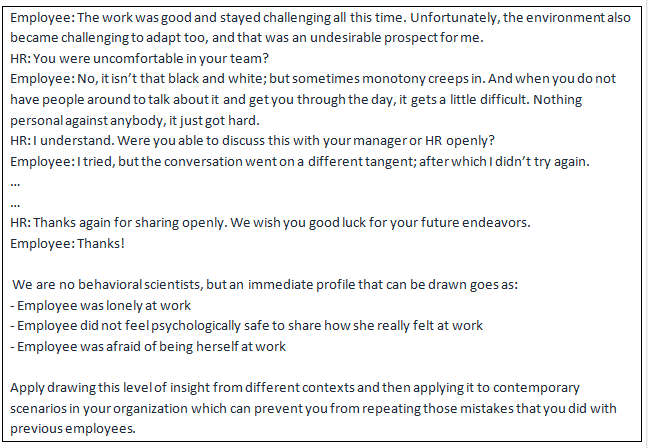 The real world Holden Ford (John Douglas) did extensive research by doing in-depth interviews with repeat offenders of violent crimes, and his research yielded a very effective criminal profiling technique. He used that effectively in investigations across the country. In 1979, his first year of providing profiling services, he did 59 cases; the number doubled the next year; and the requests reached 1000 in 1995[1].  The reel Holden Ford, with his partners in the Behavioral Analysis Unitclassified offenders into 2 categories after initial interviews and deliberations – organized and disorganized. That could happen while profiling employees as well, and those characteristics can be used to put employees (who may be about to leave, or have their performance levels dipping) into clusters, and customized interventions can be made to improve things. A behavioral science unit, in every organization, may prove to be an extremely useful ally of the Human Resources Department. Provided that the profiling is done correctly. John Douglas, in an actual case when investigating the Trailside Killer in San Francisco, profiled the offender, even deducing that he had a speech impediment. But he got one general detail wrong – he pegged the age as early thirties, and he turned out to be fifty. Even Douglas could get it wrong once in a while – so it is imaginable for someone starting this journey to make mistakes.

But look at what it eventually led to.

Special Agent Holden Ford has won the argument with Shepard, convinced the chief to allow him to dedicate time to his interviews, and now has a dedicated working space in Quantico’s basement. With his team members Tench and Dr. Carr, Ford is working on his Congress-sponsored research, an academic project of criminal profiling, interviewing infamous serial killers, and applying his knowledge to solve cases.

The special (and secret) behavioral science project at Quantico which started as an act of defiance by a curious Holden, and soon became a state-approved and sponsored project, was not welcome by the authorities, so much so that it was kept hidden. The idea seemed completely illogical, bordering on bizarre; but it brought a paradigm shift in criminology. The idea may seem of a similar ilk to Human Resources, but this also may bring a paradigm shift to how employees are looked at. Although an organization would need its own Holden!

The editorial team at People Matters has features writers, researchers and content experts with rich domain knowledge. We endeavour to create an impact on the HR community through thought-provoking and futuristic content.
NEXT STORY: Using AI to Boost Employee Engagement
Also Read: Employee Engagement: FAIL. What next?
Also Read: Skills, flexibility, diversity: Top trends that will shape FMCG industry in 2023