Article: When I became a victim of desperate hiring: learnings from JobsForHer

I gave into hiring in desperation back in October and November of 2015. We wanted to get our new product rolling and urgently needed a product manager for it. There was a serious dearth of options available to us at that time. We had shortlisted a couple of candidates, and I knew back then that the person I finally chose was not the right fit for the organization.

But I ended up hiring him – for the wrong reasons.

Yes, he had the functional know-how of how to be a product manager and knew everything about the job, but he never really cared for the purpose of JobsForHer. This notion was reinforced during one of the meet-ups that we had arranged for women on a career break who wanted to get back to work. He got bored with the discussion happening on the floor. That is when I realized - How could a person figure out solutions to the problems being faced by our customers, if he himself did not care about them?

That was the end of the line for us, and it entirely changed the way I looked at hiring.

What matters now, more than anything else, is whether an individual cares about the purpose or not. The next time I was choosing between two candidates for the role of product manager, I ended up shortlisting one who was skilled, had a good attitude and was a good fit. But while negotiating the package with him, I asked him, “Why do you want to join us?” He replied, “Anybody can tell you that they are joining you for your vision and purpose, but all that matters at the end of the day, is the money that we are taking home.”

I did not repeat an old mistake and that ended there. 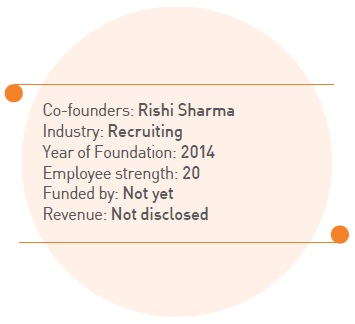 When I was searching for my CTO/CoFounder, I was ready to wait till the right person came along. Rishi and I met over coffee because of a common business associate who knew that Rishi was passionate about the startup world and that I was looking for a CTO/CoFounder. From the start, there was no doubt that Rishi had the technical capabilities of the kind of person we needed as our CTO. What really sealed the deal though was the connection he had for the idea behind JobsForHer. Rishi’s wife is an FIT graduate and very accomplished, but she did not return to work after having their two daughters. So he said that he wanted to build the company by keeping the next generation of women in mind, so that his daughters don’t face the same challenges that women currently do. That was the turning point of the conversation for both of us because until then it was about what the company is all about, what the business model is, what the future is, what is the vision is, but there also has to be a personal connect.
Read full story

The editorial team at People Matters has features writers, researchers and content experts with rich domain knowledge. We endeavour to create an impact on the HR community through thought-provoking and futuristic content.
NEXT STORY: Brexit & its Impact on Jobs

Prioritising wellness to thrive in the new world

Hiring to perk up in January-March: TeamLease Report