Article: Automation could eliminate half of work activities in India

November 30, 2014. Squat orange robots move around a warehouse skimming, selecting, picking, moving, and dropping products. A group of journalists marvel over the army of Kiva robots deployed in Amazon’s fulfillment center in San Francisco. The robots take 15 minutes worth of time for one work. Save an hour’s time.

14 December, 2016. A drone flies above open fields in Cambridge UK, carrying a TV streaming stick and bag of popcorn. It lands at a customer’s open garden in 13 minutes. The first trial delivery of Amazon Prime Air is successful.

Sometime in 2016. A team of 12 Amazonians explores how self-driving technology can help Amazon to improve package delivery.

Amazon Inc. happens to be a company that has taken to automation, robotics, and AI. It makes Jeff Bezos’ cyborg avatar appear more symbolic than hysterical. It may not be representative of ‘Pandora: The world of Avatar’, but it does represent the world where robots play a significant role in everyday lives and mark an age of human-machine augmentation.

Automation of knowledge work has been recognized as one of the 12 'disruptive technologies' that will reshape the world, according to an extensive research by McKinsey Global Institute. Its impact, too, (albeit slow and steady) can be witnessed.

“About half the activities that people are paid to do in the global economy have the potential to be automated by adapting demonstrated technology.” McKinsey Global Institute

McKinsey Global Institute conducted an extensive two-year study on the subject of automation and its impact on economy, workplace, and jobs. People Matters did a Cover Story in October 2016 on the subject of automation and its impact on jobs underscoring the human-machine dilemma on the basis of secondary research (with the dominant source being MGI’s interim findings of this study). The quantitative data was mostly specific to the United States. But the study was a revelation on its own – because it argued that it is not complete jobs that are getting automated, but some work activities within those jobs that are getting automated. For example, the job of a salesperson at Oxigen, a fintech company has not been eliminated due to automation. The part involving filing KYC documents manually has been automated; the salespeople can now give complete attention to client acquisition.

The complete research, 'A Future That Works: Automation, Employment, And Productivity' by McKinsey Global Institute was released in January 2017. This paper looked at the impact of automation on economy and jobs in 46 countries (representing almost 80% of the global workforce) in detail.

In this article, we look at the effect of automation on countries – the degree at which the work activities can be automated, the impact on economy and jobs.

Countries ranked according to potential of automation of activities 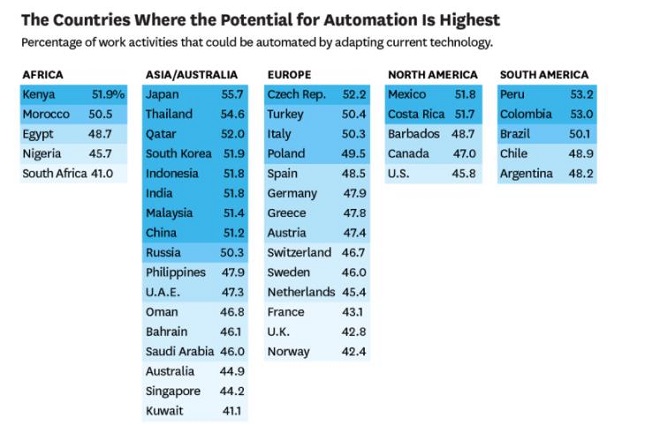 Across the world, less than 5% occupations can be completely automated. But a minimum of 30% of activities can be automated in 6 out of 10 occupations.

Worldwide, a total of 1.1 billion people and $15.8 trillion in wages are associated with automatable activities. Thus the adoption of technology to automate work activities can potentially translate into saving $16 trillion (rounded off) worth of wages and doing the same work with much more efficiency. The flipside is that it may result in the redefinition (or even displacement) of the 1 billion population (rounded off).

India, China, Japan and the United States account for half of these total employees (726.6 million) and wages ($8 trillion). We will look at the impact on India in depth (the October Cover Story had a detailed exhibit on automation’s impact on work activities in the US)

India is the second most populated country in the world boasting of a massive labor workforce. India also happens to have a very low labor cost. The average manufacturing labor cost in India recorded by Bloomberg in 2014 was $0.92 (compared to China’s $3.52). Also, a major proportion of the labor force is involved in predictable physical work, which is the most automatable work activity. Automation, thus, will impact a large proportion of the workforce in the country. Here is how automation will impact employees and wages across sectors in India:

Here is how automation will impact employees and wages across sectors in India:

Cumulatively, $1.1 trillion wages will be impacted. The maximum impact will be on the ‘agriculture, forestry, fishing and hunting’ sector, followed by manufacturing and then by retail trade. Since the maximum displacement is expected in these 3 sectors, the potential impact on wages is also replicated in these sectors.

Are machines the future

While there is no arguing against the efficiency and effectiveness of machines over humans for a milieu of work activities, or even against the business sense of having a machine substitute a human for some particular tasks.

“It’s cheaper to buy a $35,000 robotic arm than it is to hire an employee who is inefficient making $15 an hour bagging French fries” - Ed Rensi, Former McDonald’s USA CEO

This is thus on both the government and the industry to equip the 235 million with the requisite skills needed to stay relevant in the future. It would require a titanic effort to reskill and prepare people for new redefined roles in the coming era of automation. An era where Jeff Bezos may well operate sitting inside a big robotic machine!

The editorial team at People Matters has features writers, researchers and content experts with rich domain knowledge. We endeavour to create an impact on the HR community through thought-provoking and futuristic content.
NEXT STORY: How to be a winner in the talent wars in 2017
Also Read: Get Tweeting: Leaders rewrite the book on talent acquisition with great advice, challenges and the possibilities brought on by generative AI
Also Read: The Davos experience: G-P founder Nicole Sahin shares some thoughts

Will 2023 be the year of the employee: A chance to tell your story

Get Tweeting: Leaders rewrite the book on talent acquisition with great advice, challenges and the possibilities brought on by generative AI