The South Asian markets today are growing at rates that are significantly higher than the world average. According to one IMF estimate, the world economy grew by 3.3 percent in the last two quarters of 2017. However, while the growth rate within the developed regions of the world was around two-to-three percent, it was the developing countries that grew at over six percent — chief among which has been the economic performance of South Asian countries.

In a recent World Bank’s South Asia Economic Focus report, the region is poised for a period of growth and is expected to remain one of the fastest growing regions in the world. According to the report, growth in South Asia is forecast to pick up to 6.9 percent in 2018, mainly due to India’s recovery post the impact of strenuous economic policies like demonetization. Predicting an overall improvement in the region, the report goes on to add that growth rate should be over seven percent on average in FY 2019-20.

But looking at just one half of the story is often erroneous. The World Banks report on the South Asia region aptly titled as “Jobless Growth”, highlights the other half — the problem of unemployment.

A case of jobless growth?

The South Asian countries today are not only identifiable for their improving rates of growth but also for another peculiar reason, its soaring labor markets. Although the many of the South Asian countries, including India, have shown a positive change in how their economies have grown, many still haven’t been able to create enough jobs to ensure their growing percentage of working population can contribute to the growth story.

The nature of jobs created in South Asia is not fully encouraging, and the analysis shows that a rapid growth alone is not sufficient to bring employment rates to the levels observed elsewhere in the developing world

So is it right to assume that India’s growth story, similar to its neighbors, has been one of jobless growth? The World Bank report states that over the short-term economic growth, the employment rate has remained the same. To keep the employment rate stable despite increasing working population indicates that growth, at least in the short-run has not been completely jobless. Countries like India have created large numbers of jobs over the years.

“However,” notes the study, “the nature of the jobs created is not fully encouraging, and the analysis shows that rapid growth alone will not be sufficient to bring South Asian employment rates to the levels observed elsewhere in the developing world. In addition to high growth, in the long-term, more and better jobs need to be created for every percentage point of growth.”

Although the growth story of India has had an impact on jobs created, more still remains to be done to keep up in the long run. One of the important factors that highlight the matter has been the slow shift in the growth of regular wage employment. The report mentions that although regular jobs have grown, it still hasn’t been able to offset the dependence of the working population on other informal forms of employment.

Although regular jobs have grown, India has still not been able to offset the dependence of the working population on other informal forms of employment

Regular wage jobs within developing countries of the region are generally a better form of employment, compared to farming, self-employment or casual work; often helping individuals obtain better living conditions. But the slow increase of regular salaried jobs has meant that many within India still depend on casual work and unpaid employment. This view was recently shared by another report, this time by the ILO, which stated a rise in vulnerable employment in India. 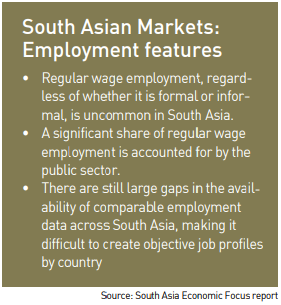 Most of the major economies of the region, including India, have a significant percentage of working population (aged 15 to 64 years). The dependency ratio, a ratio that compares the number of total dependents to that of the working population, has been falling. This means that each year more and more enter the labor markets looking for suitable jobs.

As developing nation, it is critical for India to create more jobs. More people entering the labor markets would lead to an increase in overall productivity. The report also notes that “even if the productivity of those at work were to remain unchanged, income per capita would increase, because there would be more working people per capita. But to reap the benefits of this ‘demographic dividend’, sufficient new jobs need to be created.”

A key question then pertains to whether rapid economic growth alone can generate the massive numbers of additional jobs needed.

To understand what this really means for India, it is important to see how the working population is going to grow. According to estimates in the World Bank report, to keep employment rates constant till 2025, more than 8 million jobs would be needed in India. In addition to this, just to reach employment rates of countries of similar economic growth, India will have to grow by around 18 percent. It, therefore, becomes an unrealistic expectation to squarely depend on economic growth to spur job creation.

Factors like ensuring more regular-wage jobs are created, keeping fiscal deficit in check, promoting labor-intensive industries like manufacturing and construction, and finally creating better market linkages that allow women to be a part of the formal economy are all necessary to create a fast-growing economy.

Dhruv Mukerjee is the Assistant Manager - Content at People Matters. You can get in touch with him at dhruv.mukerjee@gopeoplematters.com.
NEXT STORY: Join the Digital Bandwagon Efficiency and Higher Employee Satisfaction
Also Read: The return-to-work pushback: What it means for the future of work
Also Read: Salaries in India expected to increase by 10.4% in 2023 : Aon Survey

The return-to-work pushback: What it means for the future of work