Article: Code on the road: Uber taps into customers for hiring

Companies have been developing innovative ways to attract and woo developers, given the daunting shortages in skills market. Announcing job opportunities to a target audience is an approach that recruiters have been frequently utilizing for several years now on Social Media. Uber has recently tapped into an innovative, captive audience from its own riders in cities with large numbers of highly qualified tech professionals.

The riders in tech-heavy geographic areas in the US like Boston, Seattle, Austin, Denver and Portland have been receiving notifications en-route from Uber to flex their coding muscles with its game ‘Code on the Road’ since the likelihood of their being engineers in such cities is higher. 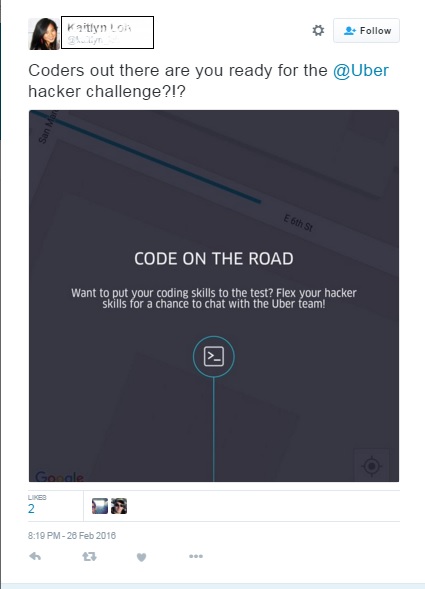 An Uber company spokesperson confirmed to Business Insider that this is the newest strategy to reach and lure code engineers to work for the fast growing startup – “The option to play gives interested riders the opportunity to show us their skills in a fun and different way — whether they code on the side or are pursuing a career as a developer." The game entails three code and debugging problems to be solved within a 60 second countdown each. If the interested riders are successful, they are invited to click a button to express interest in learning more about the experience of working at Uber. Upon clicking it, a Seattle-based coder, Joshua Debner -- reports Business Insider - received an email from the company with a prompt to apply for the job. 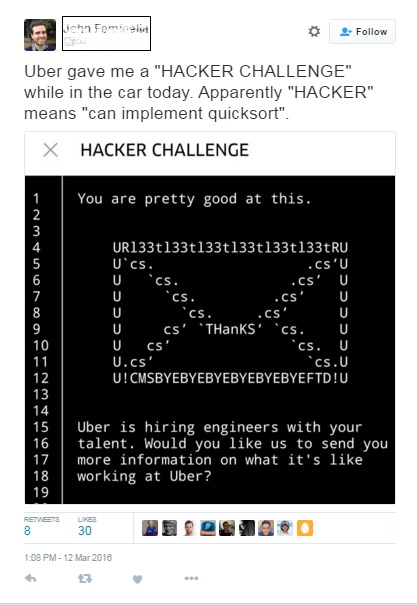 Gamified recruiting is a fast growing phenomenon, with many companies realizing that game principles can be used to attract, assess and engage potential employees. It appeals to the minds that are creative and competitive at once. Think Google Code Jam and Facebook Hacker cup, the news-making program quizzes that the respective giants have deployed recently to source talent. There are some clear advantages, as it appeals to the millennial generation raised on the Xbox and PlayStations and simultaneously projects an innovative and vibrant image of the company in industries where the competition for highly skilled talent is very intense. Games enable the recruiters to creatively extend their exposure to acquire fresh talent.

This is not Uber’s first step into gamification, but rather the latest taster to stir interest in working for a company that some of the engineers may not have considered before. In October 2015, Uber partnered with Codefights to launch the #UberBot Challenge in which players participated in timed, competitive coding challenges against bots and human players. Connor Myhrvold from Uber Engineering explains how these gamified processes actually reflect the core challenges of the company, such as finding the optimal route for a care or matching riders in uberPOOL. If the players can beat the Bot, they are invited to learn more about what it is like to work at Uber Engineering and apply for the job.

The idea of screening through ’Code on the Road’ appears to be the lite, on-the-go version of the same. The player have a mobile device with internet connectivity, and possibly the reflecting peace of a person-in-transit. Writing from Gurgaon in India, it makes one wonder if we can expect Uber’s gamified outreach soon in India too. Considering that many Indian cities like Bangalore and Gurgaon are teeming with coders and the fact that Uber is planning to make a handsome investment worth $500 million in its third largest market by June, this may not be a distant speculation.

Nandini Rathi is the Senior Associate – Content at People Matters. Reach her at nandini.rathi@peoplematters.in
NEXT STORY: 5 ways to handle an employee with rigid mindset

The role of One HR in Organisational Digital Transformation

The role of One HR in Organisational Digital Transformation

How to create a safe work environment

Why is HR moving towards digital marketplaces?